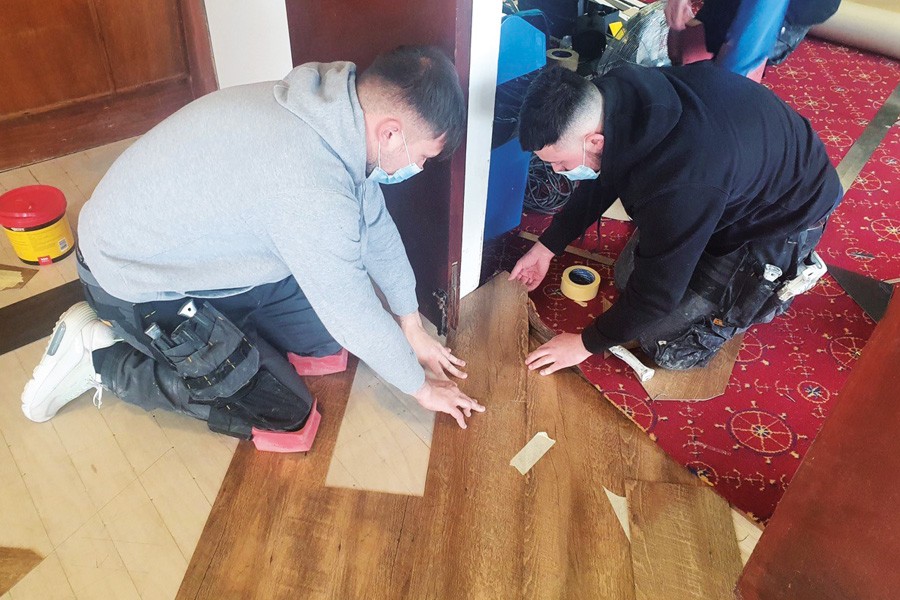 OCCASIONALLY FloorSkills is offered a property which we’re permitted to use for a few days to not only train apprentices, but also to get them involved with a real-world installation. Better still, it normally involves bespoke work or even the testing of a new product.

When this happens, we select the properties carefully and run the event as a charity installation where no labour or products are charged for, but on the understanding that the apprentices are learning. As such, we expect mistakes to be made with the installation. Also, if the flooring fails while using prototype products, no warranties are given.

Recently, we were offered a venue we’re familiar with and have used for previous apprenticeship training.

This property is incredibly unique, as it’s a member’s club which is closed throughout the week, meaning we don’t need to worry about anyone being around. It’s also a timber-framed construction with timber subfloors. But the most unique thing is that it floods!

The property is located next to the River Severn in Worcester and over the years it has started flooding. Each time, the floods get gradually worse because even though downstream river defences have been built, there’s a lack of maintenance with respect to the dredging of the river.

Previously with apprentices, we’ve used the property to install sheet vinyl on the dancefloor along with vinyl in the toilet areas.

With these installs we used Hanson SP101 Plywood owing to the timber subfloors but also to test the plywood as we knew it would be submerged in water at some point in the future.
The original flooring products were supplied by Tarkett, and a two-part resin adhesive was supplied by Mapei.

A few years passed since the last installation, then at the end of 2020 and the start of 2021, the inevitable happened – the property flooded. When I say flooded, more than 1m of water was flowing over the flooring. To make matters worse, the water didn’t dry up for a few weeks. A few weeks after the river level dropped, it was hit by flooding again. In short, the property spent the best part of a month underwater.

Once the property completely dried out, I performed an inspection to see how the flooring had performed. I’m glad to report that the flooring, plywood, and adhesives held up perfectly.

While there, I spoke to the owners about the other areas that are currently carpeted. Each time the property is about to flood, they uplift the carpets, then re-fit them after. This has been going on for years but it’s becoming more and more of a struggle for the members, with most being past retirement age.

I suggested that maybe we could use the place again and install LVT instead of the carpet they currently have. We also said we’d try out another new adhesive on the market by Uzin, which is KE68.

This is a single-part hybrid adhesive designed for high mechanical loads and extreme temperature areas. However, it also has high moisture resistance, even though it’s a single-part adhesive. It isn’t designed to go underwater (and isn’t advertised as being suitable for any contact with water) but testing at FloorSkills has shown the adhesive is impressive with respect to water resistance.

Once again, we opted to use Hanson Plywood with its brilliant SP101 flooring grade plywood. It’s proven itself many times and we have confidence it will, once again, perform with the floodwater, which will almost certainly return in the not-too-distant future.

As for the LVT, Moduleo has provided the flooring which has been used to create a custom motif. For the main flooring area, we were donated a Kahrs product from Bhavesh, the Director of CFV Direct.

CFV is a new distributor of flooring, plywood, adhesives, laminates etc. FloorSkills would particularly like to thank them, as they’ve supplied the main flooring even though they’re a distributor and not a manufacturer.

CFV had heard about the upcoming installation and contacted me, offering their support for the apprentices and FloorSkills. I should point out that any of the products used on the installation are available through CFV Direct which offers full UK distribution. Thanks again to all the supporting manufacturers and CFV Direct as the distributor.

So, what did the apprentices actually do?
FloorSkills instructors Ross McInerney and I started them off with subfloor preparation, which began with the usual checking of floorboard fixings, scraping debris and a general vacuum of the area. The apprentices were then taught about templating and back-marking of plywood along with different types of fixings.

In this case, owing to the known flooding, the apprentices also learned about additional expansion needs in a timber-framed building along with the flooring expansion required.
The plywood was installed, then fastened with ring shank nailed at 100mm centres, with 50mm centres around the perimeter. Those of you who know your British Standards will know we nailed a much tighter centre because flooding would lead to much larger loads and stress on the plywood.

The apprentices were moved on to skim coat, but only the joints. In normal circumstances, the whole floor would’ve been skim coated, but this is the weakest link with flooding, so care was taken to cover only the joints.

Then there was marking out. We started with basics, then advanced with a more challenging set out which was required, not only owing to the wonky walls, but also to accommodate the designs that had been agreed. We were creating a hand-cut custom motif, then progressed to a French weave design for the main area of the room.

With a plank border set in about 1m from the edges, we ended up with a design floor and a feature rug. The field between the designs and around the outside of the designs ran diagonally.

This meant the apprentices would have to cut the planks diagonally into the wall as well as into the centre design. Diagonal was decided on as the best option to hide the run out in the room.

Ross worked out the design with the apprentices, then showed them how to set up the multiple guillotines, along with how to create jigs to accommodate the custom design. The apprentices then started to cut the relevant LVT planks down to the correct sizes, to allow the pattern to be created.

Yes, we had a few errors along the way, which were identified by the apprentices, as they would check the design by building in sections. But making mistakes is, as any floorlayer can tell you, an important part of the learning process.

Next up was the Uzin KE68 adhesive. While impressive, it does take some getting used to. Again, this is a single-part adhesive that behaves like a two-part resin, but it holds fast with considerable power.

After three days of hard work, the floor was complete.

Well done to the apprentices – it wasn’t the easiest installation. In fact, I’d describe it as an incredibly unique install, from the building itself to the design floor they created.

And thank you to the apprentices’ employers for allowing them this unique opportunity in such a demanding installation.

We were met by Brian King, the current NICF president and founder of UKFlooring TV which is a YouTube channel. Brian filmed the installation and spent time with the apprentices, discussing how they were finding their apprenticeships as well as the installation.

Have a search on YouTube for UKFlooring TV to find the great videos Brian creates regularly.

Matt Bourne is founder of FloorSkills