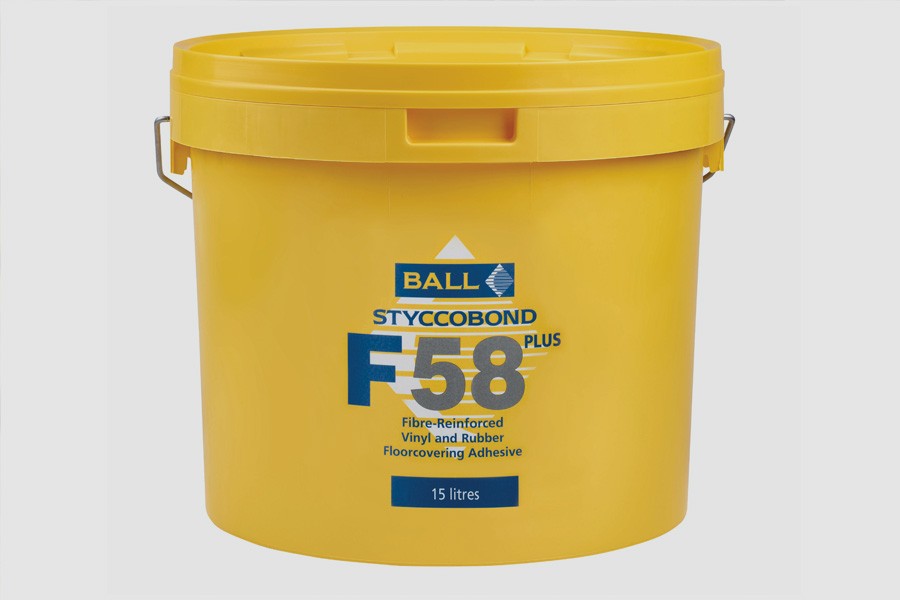 F BALL & CO’s new Styccobond F58 PLUS is described by the company as a fast-drying, fibre-reinforced, pressure sensitive adhesive that’s suitable for the installation of LVT floorcoverings.

‘Its fast-drying formulation enables LVT tiles and planks to be secured from just five minutes following application of the adhesive, allowing for a much speedier installation time,’ says the company.

Developed as a ‘transitional’ adhesive, Styccobond F58 PLUS transitions from a wet-lay adhesive when initially applied to a subfloor, through a semi-wet stage to become fully pressure sensitive. The reinforcing fibres in the formulation are said to provide resistance to lateral movement, holding tiles firmly in place and reducing the potential for them to slide around.

Says the company: ‘Offering an extended open time of about three hours, when used as a pressure-sensitive adhesive (depending on ambient conditions), Styccobond F58 PLUS allows large areas of adhesive to be applied in one application without risking late placement of the floorcovering.

When used as a wet-lay adhesive it’s also suitable for the installation of rubber sheet and tile floorcoverings up to 2.5mm thick.

‘Fully accredited for marine use, Styccobond F58 PLUS carries Emicode EC1 Plus classification – the highest certification for indoor air quality – and is protected against bio-degradation. The adhesive is available in 15L and 5L units, offering over 20% more coverage than similarly packaged products sold by equivalent weight.’

Commenting on the new adhesive, sales director Darren Kenyon said: ‘Styccobond F58 PLUS offers greater flexibility to suit contractors’ needs and preferences, allowing early installation of LVT tiles to significantly reduce waiting time while the adhesive dries and minimising the downtime that areas are out of commission. High coverage rates delivered by each tub of adhesive also represents great value for money.’
01538 361633
www.f-ball.com