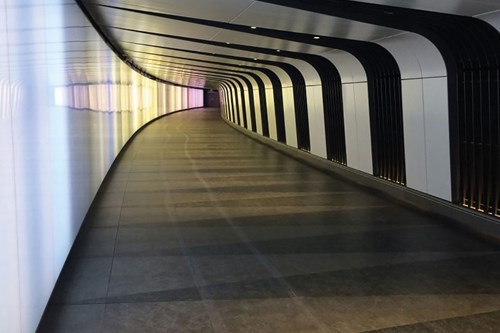 CFJ talks to David McCartney, ceo at DMC, about the journey from apprentice in the tiling industry to creating an award-winning tiling company.

TWENTY-ONE years is a long time, but that’s how long DMC has been operating, in one form or another, both in the UK and Ireland. As to how long 21 years feels, cast your mind back to 1999. Back then we were worrying about the Millennium Y2K bug and the prospect of computers failing, the Twin Towers in New York still stood, the national minimum wage had just become part of the law in the UK, and Europe introduced a new single currency – the euro.

So, winding back to the beginning of DMC, CEO David McCartney tells how he began his career in the tiling industry at the age of 17, having been offered an apprenticeship to work at Quiligotti Contracts Limited.

But not content, McCartney sought a new challenge and so took the leap from installer to business owner and formed DMC Tiling. ‘Our first awarded project,’ he said, ‘was Bristol Airport Phase One where we carried out the management, installation and engineering works.’ The job clearly went well – McCartney says that DMC still carries out works for Bristol Airport to this day.

The business then took on work with Metronet under the government’s public-private partnership which committed to fully refurbish all the London Underground Stations. As McCartney says, ‘this was a great challenge for all involved and at one-point DMC was involved in 18 stations. These were full refits, with many being heritage works.’

This work led onto other things which McCartney says followed on from ‘the explosion in the rail sector, in London in particular.’ As a result, DMC Rail Limited was formed and ‘this,’ he says, ‘allowed DMC Tiling Limited to focus on supermarkets and high end projects and DMC Rail Limited move into the infrastructure sector.’

In time, DMC Rail was renamed DMC Contracts Limited ‘to demonstrate our holistic service from inception to completion in all sectors, not just rail, operating in the aviation, commercial, health and education sectors.’

He says that the company was awarded the STAKE framework contract working directly for Transport for London – ‘we commenced works on nine Crossrail stations, a massive undertaking. We are still on site in multiple locations.’

As McCartney tells, it now employs 45 office and over 250 site staff. ‘We are now a single source for the complete floor zone. We can maximise all flooring solutions from screeds, sub floor preparation to floor finishes.’

This eliminates inherent issues using multiple trades and managing multiple packages and contracts.’ He adds that DMC now provides a full range of services from estimating, design development, value engineering and management of the project through to handover.

It’s all in the brand
Just as trust is hard to earn and easy to lose, so is a reputation. This is why McCartney is keen to emphasise that his industry reputation is ‘built on professionalism and trust… we retain our existing clients and move from project to project with them.’

The company operates nationally but, that said, with ongoing works with Transport for London, London Underground and Cross Rail it is predominately London based. And the clients are just as large and feature many tier one contractors such as Kier, Skanska, Balfour Beaty, Laing O’Rourke and Osborne.

DMC’s strengths
No business worth its salt wants to work on ‘one-hit’ wonder deals. And DMC is no different. Says McCartney, ‘client satisfaction is always paramount to every contract we undertake. We have underlined our commitment to delivering high standards, on time, every time and most importantly on budget.’

Part of this is down to what McCartney explains is its people: ‘We have a highly skilled estimating department which has outstanding product knowledge and our project team and highly skilled installation teams are on hand with onsite expertise and manage the most challenging installations. And of course, nothing could run smoothly on site without our highly knowledgeable and proficient commercial, health and safety and office support team.’ Fundamentally, McCartney says the company is ‘very fortunate to a have strong and diverse team from the operatives in the yard to the directors.’

Young workers at DMC
Getting the young into the sector is a problem that CFJ has commented on before. And DMC proactively seeks to help. As McCartney notes, ‘DMC has a fantastic team of young people who are provided with the opportunity to learn and develop, with the experience, and exposure to flagship projects that DMC can offer.’ He says that they have the opportunity to study for various qualifications, such as HNC Construction and the Built Environment, BSC Quantity Surveying, Foundation Degree Surveying Practices, AAT Level 3 and CSCS. At the centre of keeping these employees keen is DMC’s offer of ‘invaluable training ‘on-the-job’… and we benefit from the intelligence and great work ethic that these people bring.’

The state of play
Coronavirus and Brexit have undoubtedly had a significant effect on the construction industry. That should be obvious to any onlooker. For McCartney, ‘the lack of consumer confidence and general uncertainty over the economy has certainly held the industry back in recent months.

But overcoming the initial delays and site shutdowns we are now back on track for a successful and profitable 2021 and beyond.’

As for how coronavirus affected DMC, specifically, McCartney points to an ongoing desire to ensure staff safety and well-being. ‘From very early on in the pandemic we embedded a wide range of innovative and technical procedures to ensure we could continue to operate both on and off site.

We took full advantage of the situation to innovate and re-engineer the way we do business.’ He explains that DMC was already geared up for remote working and cloud-based storage so has managed workplace disruptions effectively. While most staff are now back in the DMC office full time, he says that ‘we are still mindful and understanding that some staff’s personal circumstances have changed.’

McCartney notes that at one point, material supply was an issue. But that problem ‘appears to have levelled off now… the early issues with logistic and production line closures has ceased as we moved back into full site works, and where possible we’re getting the programmes back on schedule.’

Business performance
As a business he reports that DMC ‘had a strong start to the year with strong balance sheets and increased sales. Turnover and profitability remain on target and we used the quieter periods to seek out new talent and expand on our existing services.’ He’s recently – in September – employed a new head of soft flooring and operations and also created a new facilities and maintenance department. As he puts it, ‘we are now perfectly placed to carry on assisting our clients post project completion working with the end users.’

The company appears to have done well with some high-profile contracts this year that include the Plymouth Life Centre through Balfour Beatty with a value of £2.2m spent on waterproofing, screeding, rendering, wall,  soft flooring and floor tiling. And then there is the Crossrail West Package 3 via Morgan Sindall to the tune of £1.3m, and also Parsons North under Osbourne that was worth £300,000.

It was also a finalist at the Construction Enquirer awards.

Being sustainable
No one, no firm, can live in such splendid isolation that it ignores issues relating to sustainability. On this, McCartney says DMC tries where possible to ‘use local, natural and sustainable materials and sustainable construction techniques.’ He adds that all wood products are FSC certified and we ensure we use companies such as Recofloor for recycling vinyl. Also, DMC tries to adopt sustainable travel policies and reduce general waste in the office and on site.

To finish
It would be impolite to ignore the achievements of DMC and David McCartney. To start in the trade as an apprentice and end up, as he has, CEO of firm undertaking multi-million pound contracts is something to note. The question is, where will he and the company be in 2041?

One thing is certain, the young entering into the flooring sector today would do well to follow DMC’s path