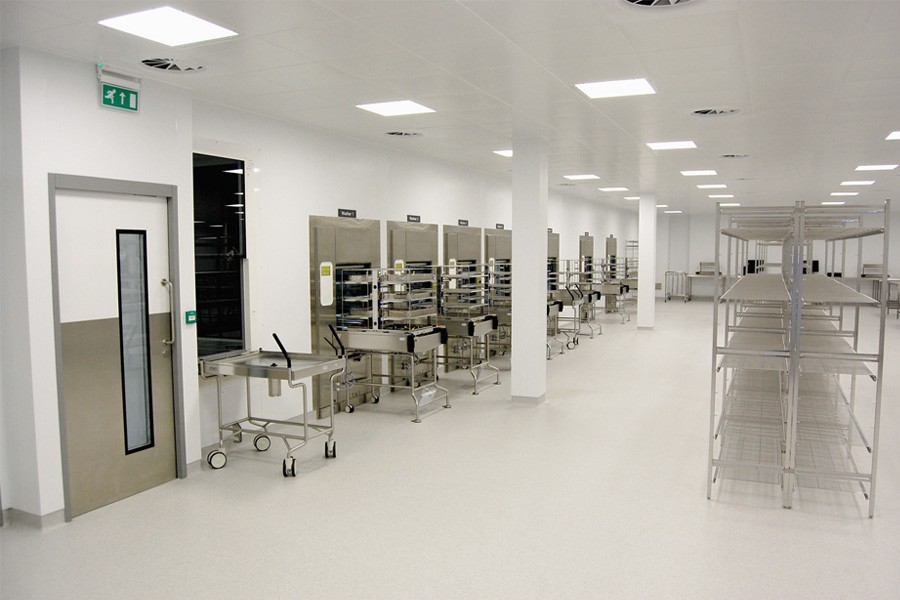 PRODUCTS from F Ball & Co including its Stopgap 300 HD levelling compound and Styccobond F46 pressure-sensitive adhesive, have been used to create a flooring finish as part of the transformation of a former car showroom into a sterile and decontamination unit for the Royal Free London NHS Foundation Trust.

Contractors from Fay Flooring were called to install a combination of vinyl sheet and safety flooring over a total area of 3,000sq m in what was once claimed to be ‘London’s largest indoor car hypermarket’, in Enfield.

The subfloor preparation process commenced with the scabbling of the subfloor to remove layers of paint that were present. A moisture test was then carried out to ascertain moisture levels in the building’s concrete substrate, and it was determined subfloor relative humidity (RH) levels were greater than 75%.

Therefore, a waterproof surface membrane would be required to provide a barrier against moisture attacking adhesives and floorcoverings, potentially causing floor failure.

F Ball’s Stopgap F78 one-component waterproof surface membrane was applied in two coats, the second 30 minutes after the first. The product creates a barrier between residual construction moisture and floorcoverings where subfloor relative humidity values are up to 95%.

Once the membrane had cured, F Ball’s Stopgap 300 HD levelling compound was then applied to provide a smooth, hard-wearing base for the receipt of new floorcoverings. The product’s heavy-duty properties reportedly make it suitable for use in areas that will be subject to high footfall and heavy wheeled traffic.

Stopgap 300 HD is also reportedly protein-free, making it suitable for use in biologically sensitive settings, such as hospitals.

As part of the installation, floorcoverings were capped-and-coved at all wall junctions, helping create what’s described as a neat and practical finish. The welding of seams up to the wall junction ensures a watertight seal, preventing ingress of water, an essential requirement in a healthcare setting which will be subject to extensive cleaning.

Patrick Fay, contracts manager at Fay Flooring commented on the project: ‘The project initially appeared to be quite a challenge but with advice from the local F Ball tech rep and their products, the job was straightforward and completed to a high standard. We use F Ball products exclusively as they’re reliable, easy to use, and the manufacturer guarantees them.’