When preparing a subfloor for the installation of floorcoverings, priming is sometimes an overlooked step 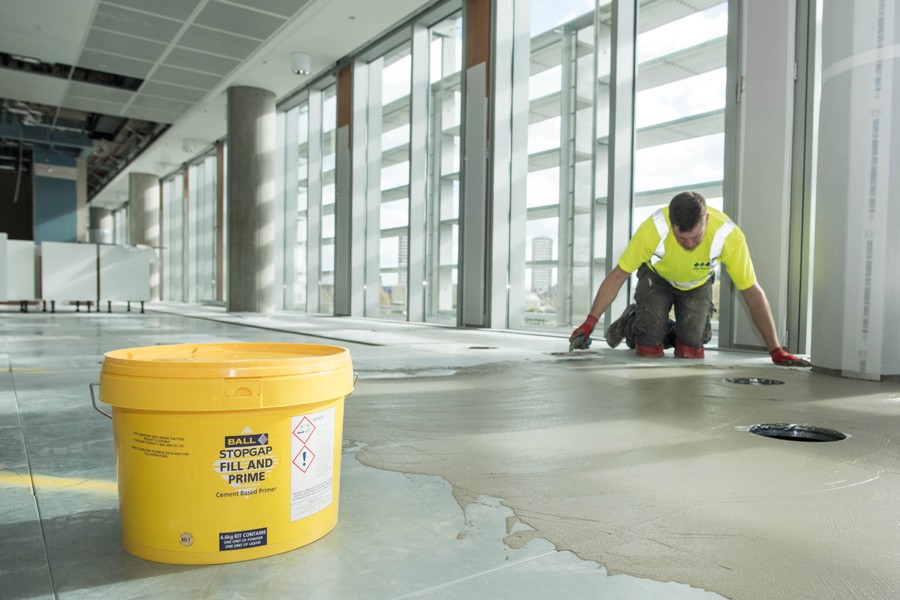 WHEN it comes to preparing a subfloor for the installation of floorcoverings, priming is sometimes an overlooked step. While it may be perceived by some contractors as unnecessary, costly or time-consuming, priming can be the key to a successful flooring installation.

When applied to non-absorbent surfaces, such as waterproof surface membranes, terrazzo or ceramic tiles, primers are designed to enhance the application characteristics of subsequently applied levelling compounds.

Priming absorbent subfloors, including porous concrete and sand/cement screeds, also promotes the adhesion of subsequently applied flooring preparation products, as well as preventing the unacceptably rapid drying of levelling compounds and adhesives. Insufficient water for complete hydration of a levelling compound, may result in poor strength build up.

Avoiding the rapid loss of water from a levelling compound will also prolong its open time. Similarly, adhesives that dry too quickly can lose their tackiness and ability to adhere floorcoverings properly.

Time to prime
Just as the reason for priming depends on the type of subfloor, this will also determine the optimum primer for a particular situation. General purpose primers are available that can be used over both absorbent and non-absorbent surfaces.

If preparing a particularly absorbent subfloor, it may be necessary for a contractor to apply a second, or even third, coat of the primer. The contractor would normally use a roller for application to ensure even coverage of the primer, with pigmented primers making this easier to gauge visually.

This extra adhesion is particularly desirable where deep base levelling compounds are applied at a thickness greater than 20mm; the strong bond reportedly created when using a primer such as F Ball & Co’s Stopgap P141, is said to be better able to withstand the increased stress that thicker levelling compounds experience when drying.

Primers are also available for specialist applications, such as when working with calcium sulphate screeds, an increasingly popular choice in new builds. These are formulated to promote the application characteristics of compatible levelling compounds; such primers contain finer particles than other products, helping them to bond with calcium sulphate screeds, which are denser than concrete or sand/cement screeds.

Says F Ball: ‘For these situations, cement-based primers are available, such as F Ball’s Stopgap Fill and Prime, which fill the joints between the panels whilst simultaneously priming the subfloor, saving valuable time. These primers have a thixotropic consistency, meaning that they flow freely when stirred but set to a gel-like consistency on standing, enabling the joints to remain filled. They are also suitable for use over substrates with well-bonded, waterproof adhesive residues prior to the application of a levelling compound.’

When not to prime
The company continues: ‘One exception to the need for priming is when working with levelling compounds that can be applied directly over well-bonded old adhesive residues, such as F Ball’s Stopgap 1200 Pro. In this specific application the subfloor doesn’t require priming.