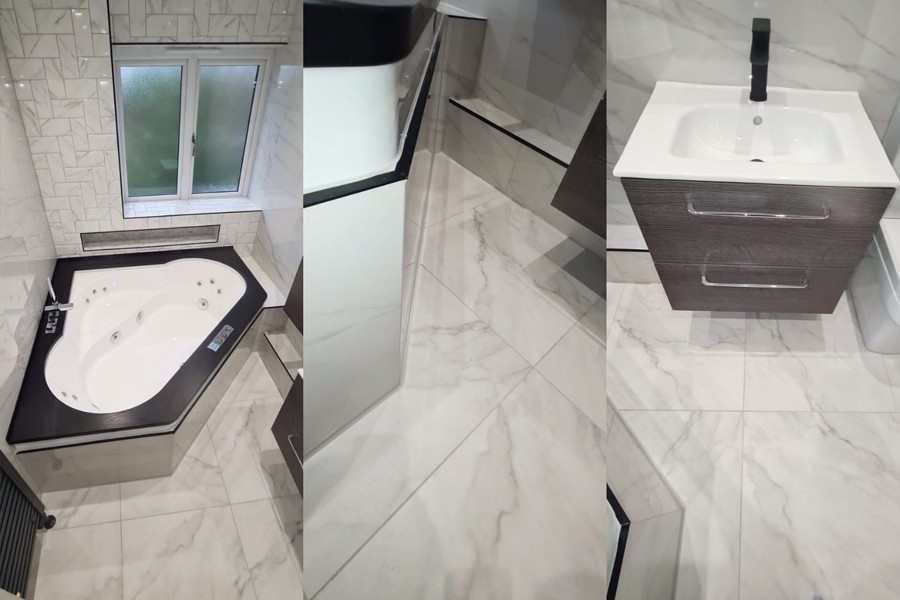 A RANGE of BAL tiling products are to feature in a new bathroom make-over show on Channel 5. GSA Bathrooms was approached in October by PI Productions to feature in a new show: Kitchens and Bathrooms: You Won’t Believe Your Eyes, hosted by Mark Miller from DIY SOS fame.

A £23k bathroom renovation in Edinburgh, featuring a £10,000 hand-made bespoke jacuzzi bath shipped over from Italy, was selected to be filmed as part of the programme which will air later this year. The full project took two months to complete owing to Covid-19 hold-ups, finally finishing in December last year. TV crews were onsite for six weeks.

The tiling was completed by KK Tiling Ltd from Edinburgh who used BAL Flex One – enhanced standard set tile adhesive for the wall tiling and BAL Rapid Flex One for the floor tiling. All the tiles were grouted with BAL Micromax2 Grout in Gunmetal.

The 1,200x600mm Marble Wall Tiles were used to complete one wall of the bathroom and the Jacuzzi surrounds, where they were fixed with a mitre finish. The back wall, window surrounds and niche were tiled using the Metro Carrara Tiles in an offset herringbone pattern which was a last-minute design change by KK Tiling.

Kevin Swinton from KK Tiling explained the design change and the pressures of tiling with a TV crew filming their every move.

‘The original design focused on the 1200×600 Marble Wall tiles extending around the whole bathroom, but after some stock issues, we decided to create a feature wall using Metro Carrara Tiles in an offset herringbone pattern. It definitely creates a focal point in the room and draws the eye.

‘This project was definitely a different sort of pressure, knowing that your every move and everything you say was being recorded, but we got used to it after a couple of days. Probably the most stressful part of the whole project came down to the last tile to be cut – if it snapped the wrong way in the cutter, we could have been in big trouble as we had no spares – luckily it went the right way for us!’

Kevin has always been a big BAL user and chose BAL Flex One for the walls owing to its versatility. He added: ‘Flex One is a great product and gave us that little bit of leeway to build out, up to 15mm in isolated areas, which was particularly useful as some of the walls weren’t 100% flat in places and some of the wall tiles were slightly bowed in the middle.’

Stewart Knox from GSA Bathrooms said: ‘It was absolute privilege to have been asked to take part in this up-and-coming TV project. Thanks to the customers – Billy and Tarek – who agreed to have their home over-run by tradesman and camera crew and our amazing team of trusted tradesman that go above and beyond week in week out to help us achieve these transformations. It wasn’t just us, it was a collective effort.

‘Special thanks to Kevin and Kyle Fee from KK Tiling who delivered a fantastic tiling project – the mitres on the bath panels are stunning – and constantly came up with great ideas – such as the herringbone wall. It’s been some journey for us all, but one we all chipped into and delivered too such a high specification once again, while being filmed throughout the entire process.’
www.bal-adhesives.co.uk