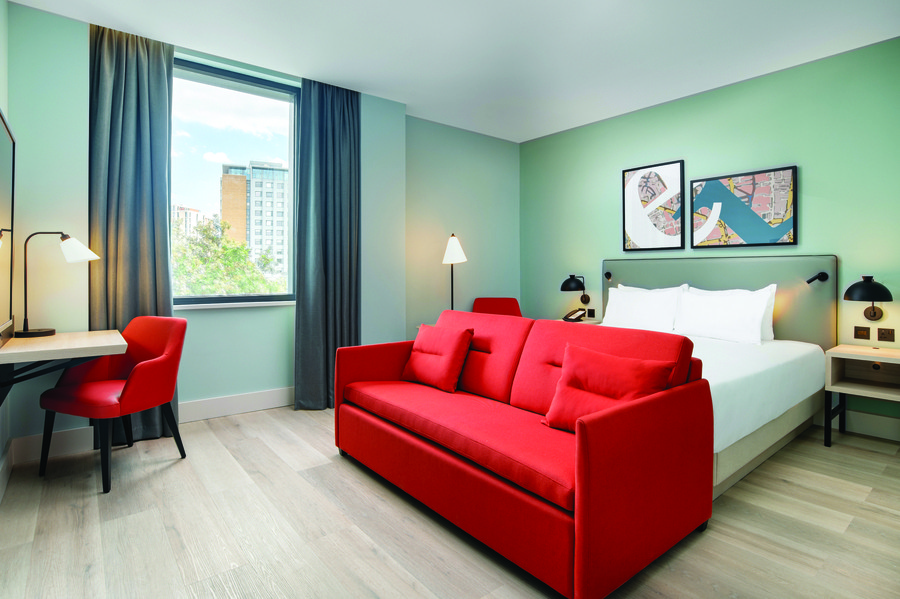 THE installation of floorcoverings throughout the new Hyatt Place hotel in central London has been part of a large redevelopment project that has included the refurbishment of several floors, plus the construction of additional ones.

This presented various challenges for ensuring ideal subfloors, but Bostik says it was on hand to supply subfloor preparation and adhesive products – including its new FIX A320 TACK as well as expert technical advice throughout.

Situated near the capital’s financial district, the hotel is the first Hyatt Place franchise in the centre of London, and features 280 rooms as well as a courtyard, a gym, and a grab-and-go food market.

The project has been a redevelopment of an office at Black Lion House on Whitechapel Road, and involved refurbishing the first six floors and adding a further three.

Titan Interior Solutions was appointed to install 7,000sq m of carpet tiles throughout the building, and turned to long-term supplier Bostik for its subfloor preparation and adhesive products, as well as technical advice on all aspects of the installation.

Out with the old
During the project, Bostik’s technical team visited the site on several occasions, making close inspections of the floors and testing for moisture, before providing Titan with recommendations based on their findings.

While the subfloors in the refurbished section of the development were generally in a good condition, the team noted a number of issues that needed addressing. For example, many exhibited slight height variations, which meant a higher application thickness of smoothing compound would be necessary to create a smooth, flat surface on which to lay the flooring.

Bostik also recommended that Titan remove certain parts of the subfloors that could otherwise undermine the floor’s integrity – such as a section of quarry tiles in one of the corridors that were found to be weakly bonded – and infill other areas where there were gaps, including around the lift shaft on the sixth floor.

In addition, the seventh floor was heavily contaminated with plaster spotting and required removal, while on the same floor, water ingress had occurred in one of the rooms and migrated to some adjacent apartments.

Going with the Flow
Based on these observations, Bostik compiled a recommendations report for Titan Interior Solutions, which Titan then followed. The first step was to ensure the subfloors throughout the building presented a clean, sound surface and were completely dry.

With this done, the company then thoroughly primed the subfloors throughout the building using Bostik’s solvent-free Universal Primer, before allowing it to dry – a process that takes about an hour in good conditions.

Next, Titan applied what’s described as Bostik’s high-flow, easy trowelling Screedmaster Flow smoothing compound, creating a smooth and flat surface on which to lay the carpet tiles. Crucially, this was applied at up to 6mm thickness to ensure the slightly uneven subfloors were made level.

In areas where vibration or thermal movement could prove problematic, Bostik instead supplied Titan with its Screedmaster Flex smoothing compound, which is fibre-reinforced to withstand such conditions.

‘With a strong, smooth surface established throughout the building, Titan was then able to bond the floorcoverings using Bostik FIX A320 TACK, the company’s new carpet tile tackifier that provides a permanently tacky film when dry to facilitate the easy removal and replacement of carpet tiles,’ says the company.

‘A great working relationship’
Owing to Bostik’s technical advice and products, Titan Interior Solutions was able to install the floorcoverings to ‘an ideal standard’ throughout the new Hyatt Place hotel, overcoming challenges and remaining on schedule to fulfil its contract with the builder.

‘While this was a relatively straightforward project in terms of the challenges we faced, there were still some hurdles along the way. Bostik’s team was able to identify these as they appeared and provide us with the right solution for how to overcome them every time,’ comments Alex Fletcher, operations manager at Titan Interior Solutions.

‘We’ve had a great working relationship with Bostik – including both their technical and service teams – over a long period of time. This has led to repeatedly high volumes of business over the years, and we would highly recommend using not only their products, but also their team.’

James Rosher, technical services consultant at Bostik, adds: ‘This was a large project that required a number of visits to the site as work progressed, and it’s great to know that our recommendations and products hit the mark and helped Titan to get the job done to the best possible standard.’ 
www.bostik.co.uk