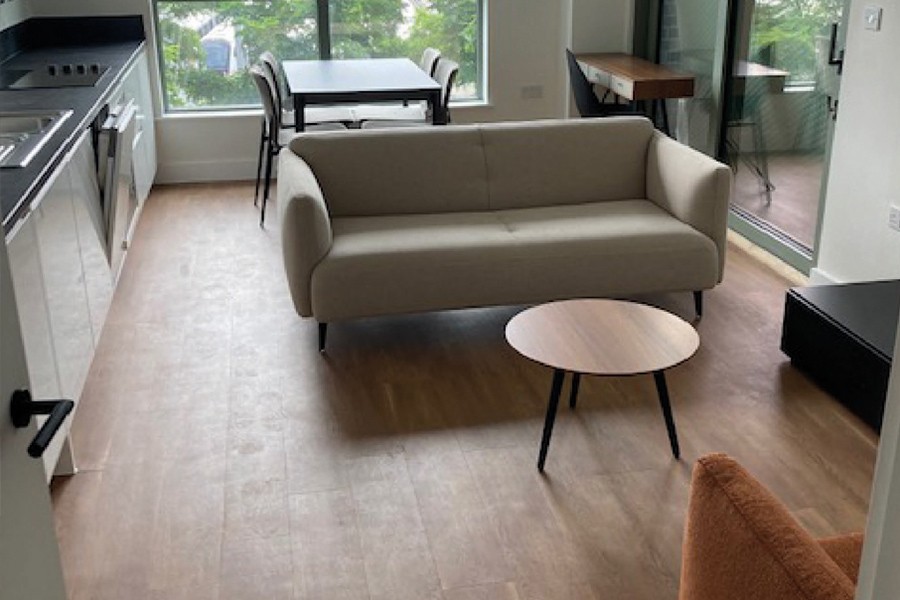 THE Oaklands House development on Old Oak Common Lane represents London’s biggest regeneration since the 2012 Olympics. Constructed by Vistry Partnerships, it has transformed a derelict brownfield site into a new neighbourhood, providing local people with 605 homes, as well as office and commercial space across three major blocks.

Titan Interior Solutions was appointed to install the flooring throughout the 24,000sq m housing-led development in West London. It turned to long-term supplier Bostik, which could reportedly provide the expert subfloor preparation advice, as well as its products, needed to make this site’s regeneration a reality.

Fail to prepare, prepare to fail
Once called on by Titan Interior Solutions, Bostik’s team of expert technical consultants visited the site to inspect the subfloors and conduct moisture tests, enabling them to make their recommendations for how best to install the floorcoverings.

The team discovered several inconsistencies on the surface of the anhydrite-based subfloor. The surfaces of some of the lower levels were hard and dense, and therefore difficult to abrade, while areas of the upper levels contained lignite or layers of soft laitance, making them easy to abrade.

In addition, while moisture tests showed most areas of the buildings were relatively dry, a small number of rooms exhibited high readings.

Bostik found this was because those rooms were being used for storage, causing the covered floors to struggle to breathe. Spillages to these surfaces had compounded the problem and meant water had been allowed to build up on them.

‘The report Bostik provided after surveying the anhydrite slab was invaluable to how we prepared the subfloors,’ comments Alex Fletcher, operations manager at Titan Interior Solutions. ‘It fed into everything we did and enabled us to move ahead, confident we could do the job to the best standard despite the inconsistencies in the subfloor.’

The right solutions
In the dry areas of the buildings, the first step in the preparation process, once the subfloor had been mechanically prepared and vacuumed, was for Titan Interior Solutions to prime the subfloor with Bostik Screedmaster GRIP E946 EPOXY PRIMER.

Says Bostik: ‘This two-component, water-disposable primer cures via chemical reaction and is coloured so coated areas can be easily identified. In the areas where moisture was a problem, Bostik Screedmaster HYTEC E570 ONE COAT, the solvent-free, epoxy surface DPM was used prior to priming.’

Titan Interior Solutions then applied Bostik Screedmaster SL C 540 FLOW. Says Bostik: ‘The two-part, protein, and casein-free, cementitious smoothing compound offers improved workability, with its high-flow, easy trowelling properties making it suitable for largescale projects such as this one where there’s a significant area to cover.’

The company says: ‘Finally, the company applied the brand-new STIX A740 MULTI BEST, Bostik’s resin-modified, solvent-free acrylic adhesive for use with resilient floorcoverings. The formulation of Bostik STIX A740 MULTI BEST enables it to offer extremely strong wet bonding while also providing a long open time, making it the ideal choice for a range of floorcoverings.’

‘Bostik was superb to work with throughout the project, making great recommendations and visiting the site numerous times to confirm if DPMs were needed for certain areas,’ concludes Alex.

‘We have a great working relationship with Bostik, with both their technical and sales teams, which has led to high volumes of repeat business over several years. I’d highly recommend using not only their products, but their team.’ 
www.bostik.co.uk