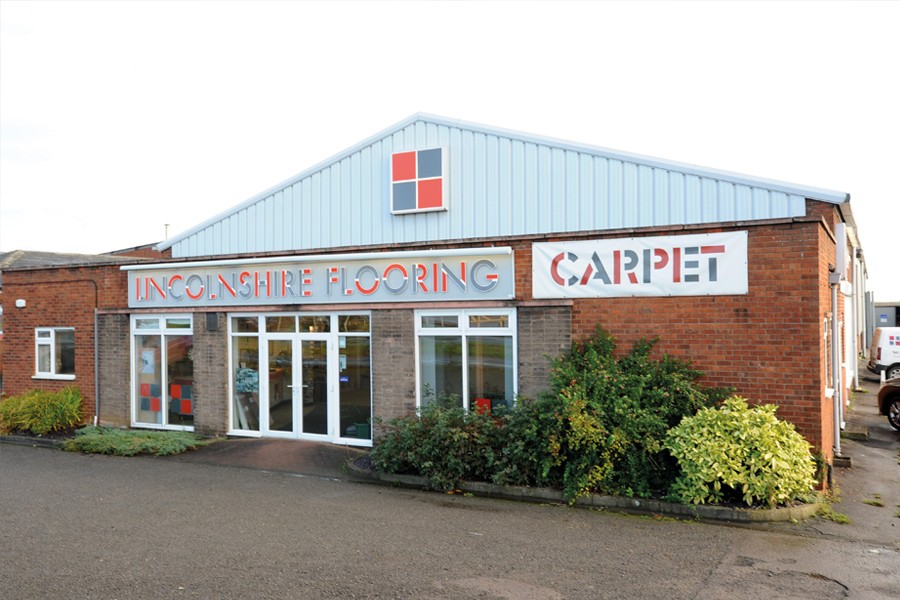 Graham Jefferson tells CFJ about the journey his business, Lincolnshire Flooring, has been on since 1966 when his father, Tony, bought the Lincoln branch of National Flooring from the receiver.

LINCOLNSHIRE has changed greatly in the 56 years since a flooring company was set up to serve the region. As Graham Jefferson explains, the business – Lincolnshire Flooring – was started in 1966 when his father, Tony, bought the Lincoln branch of National Flooring from the receiver.

A family concern
Tony had three sons – Graham, Stuart, and Martin. ‘Each,’ says Graham, ‘was told to go and get a job. I started my working life with British Home Stores, Stuart joined the army, and Martin started work in the motor industry’.

In the early ‘70s Graham tells how he and Martin joined the family firm. By the mid-‘80s Tony had retired leaving Graham and Martin to take over the running of Lincolnshire Flooring.

Graham says: ‘It was my experience in retail and management that lead to the opening of our first retail showroom. Martin, however, took on the training of new fitting teams, the company fleet and eventually ran what was to become the new homes sector.’

This involved working with firms such as Barratt Homes, Vistry Homes, Linden Homes, and many more.

In the beginning
As Graham describes, in the beginning, most of the materials laid were wood flooring and thermoplastic tiling along with linoleum. And with many RAF stations around Lincolnshire at the time much of the firm’s work was Ministry of Defence (MOD)-based along with council and health authority jobs.

But as Graham highlights, the mix has changed somewhat as ‘nowadays there is much less emphasis on solid wood flooring in favour of a wider spread of material. Since a diversification in 1977 into the retail sector, much more carpet is sold’.

And as for the contract side of the business, Graham says the advent of carpet tiles and needle punch carpets in schools has led to an increase in the meterage of carpet that the company lays. And then there’s safety flooring – as health and safety has grown in importance, so it’s become an integral part of the specification process.

Looking at what is in demand now, Graham points to LVT that’s ‘increasing in both the retail and commercial sectors dramatically as there is a move in the market towards presentation’.

All change
Under Graham and Martin’s stewardship, the company, says Graham, grew ‘to be successful, building on years of good customer and supplier relationships’.

But in time the business outgrew the building it had started in, so in 1996 moved to its present location. But by 2006, the increased volume of business that came from housebuilders required the building of an extension to provide more warehousing and office space. The extension cost in the region of £500,000.

As Graham tells: ‘It was another storm to weather, but because we had no borrowing, we managed to survive on the work coming in from the refurbishment sector.’

Key to success was, in his words, ‘remaining true to our core values of maintaining good customer and supplier relationships along with a keen eye to customer satisfaction’.

He says all sectors of the company steadily expanded, as did staffing levels, to cope with the increase in turnover. Graham adds that ‘we worked, and still do work, for many well-known names including Asda, Lloyds Bank, Morrisons, TSB Bank, Pret A Manger, Domino Pizza, as well as local authorities, health authorities, schools, and housing associations’.

Graham’s son, Zach, is part of the business. He too, says Graham, was told to go out and find a job elsewhere. This he did but 15 years ago he joined the firm in the contracts office before leading a team to take over the running of the business. He’s now managing director.

Another integral person in the business is Dawn Smith, says Graham. ‘She,’ he says, ‘has been with the company for more than 38 years running the office and administration. Dawn joined Zach in taking the company on and into the future.’

It’s interesting Graham did have plans to retire a little while ago. He explains: ‘It was agreed with Zach and the team I’d stay on for a couple of years just to assist with the transition… and at one point I got down to leaving the office at 1pm come what may.’

But that, as he tells, wasn’t to happen because of one of the new team of directors ‘decided it was not for him and left the company’.

And to compound the situation, Graham says the business also lost a member of the showroom staff who was on maternity leave. The matter wasn’t helped by the fact the company wasn’t able to start recruitment until the lockdown eased and so, as Graham says, ‘all members of staff were under additional pressure and hence I stayed on to assist in the day-to-day administration’.

As for what he does now, he says his role in the business is more financial. This means he’s involved in preparing budgets and strategies for the board to review. Notably though, he says ‘we’ve been very lucky in the past three months in be able to attract some good people into the business… and their knowledge is increasing daily’.

Graham singles out a new house-build manager – Max – who ‘is already making improvements to the systems and the teams that work in that sector’. Further, he says the retail team has been ‘totally remodelled’ although he adds some of the new members have extensive history and experience in the trade.

Shutdown
Covid-19 is the elephant in the room for many. On this Graham says ‘shutdown didn’t quite happen for us as we were working for the council in their efforts to rehome the homeless and off the streets’.

He adds that Lincolnshire Flooring also worked with many hospitals and health authorities that required urgent works. Understandably, the retail side of the business had to close.

The pandemic didn’t make the transition easy for the new management says Graham, ‘but in no small way owing to the efforts, loyalty and hard work of our fully employed fitting teams we seem to be through the worst of things’.

He says the firm is very busy at present and there are constant problems with supply and prices; in many cases they’re creating long lead times for customers.

Thankfully, he says ‘currently these lead times don’t seem to be preventing people from spending money. However, long-term contracting tenders are not as plentiful as they were pre-Covid-19’.

He thinks this is due to a reticence in planned spending by larger companies. But to compensate, Graham says that because the firm is in a finishing trade there is plenty of refurbishment – ‘make do and mend work’ as he calls it – going on.

Brexit
Fortunately, Lincolnshire Flooring hasn’t, says Graham, been hit by Brexit. But from a labour point of view, the shortage of lorry drivers is most definitely having an effect: ‘Deliveries can be spasmodic; the flow of material and the stability in pricing is something that was without doubt not publicised enough or discussed when the campaign for stay or leave was debated.’

He passes a comment that while the company’s fitters are employed, it occasionally needs to supplement the workforce with subcontract labour when the workload increases. Notably, Graham is not impressed by the way that some subcontractors operate: ‘These fitters, because of market forces, have become extremely demanding and unreliable hence I say they have a ‘Premier League football mentality’.’

In expanding the point, he says they frequently don’t turn up for work because of the offer of a cash job, one that is more attractive, or a job that is easier or more accessible. No matter, he’s not impressed.

Graham adds that Lincolnshire Flooring has ‘worked successfully with a local company, Floortrain, where we send apprentices for off-the-job training to achieve the necessary NVQs. That said, manufacturer-led courses, at present, are off the table. But hopefully, as things progress, they will reappear’.

Graham – and the company for that matter – are hot on training. It’s interesting that, for him, the lack of it in flooring is a personnel bug bear as ‘there is a massive skills shortage in an industry that pays well. The work is hard, but it is very rewarding and for us there is plenty of it.’

But as well as apprenticeships, the company offers all staff the opportunity of factory visits and or additional training where needed ‘as we feel this only goes to enhance knowledge’.
Looking to the future, the company has managed to recruit new people into all sectors of the business ‘that,’ Graham says, ‘should take the company on for the next 20 years or so’.

On a personal note
As for Graham, he says ‘it’s now very much time to hand over the running of the business to the new team. Their enthusiasm gives me great hope for the future of the company’.

And he adds a note of wisdom – that ‘it’s always nice to have the experience of age, but ‘different’ is not another word for wrong; doing things a different way doesn’t mean you’re doing it incorrectly’. He says his father’s ways weren’t his ways, and his ways aren’t those of his son.

It’s perfectly relevant that when asked about his job title for this profile he responds quite definitely: ‘As to job title, I gave all that up when I retired. I’m solely here to ensure the new management can get things up and running with the required input from me’.

He emphasises what should be obvious – that ‘I’m actually working towards making myself redundant and superfluous to the company’s needs’.

All this means, as he takes pleasure in saying: ‘For me, sun, sea, and travel beckon.’
But before he ends, he mentions the curious case of an unnamed celebrity he’s worked for. A

pparently, as the story goes, the ‘celebrity lived in the middle of Lincolnshire with uninterrupted views of the Wolds from their window – except for several electricity pylons. The answer to the problem was to apply for planning permission for a helipad.

Planning permission duly granted, he then applied for the pylons to be moved as they were danger to a landing helicopter.’ The pylons were removed, and the picturesque view of the Wolds was restored.
www.lincolnshireflooring.co.uk