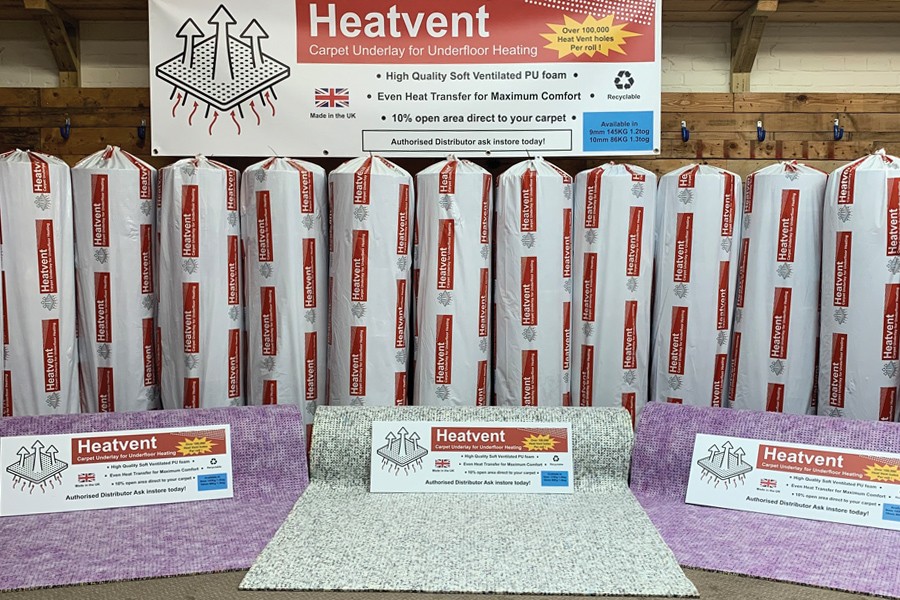 ‘HEATVENT’ is reportedly the new name in luxury carpet underfloor heating underlay. It’s a soft ventilated PU foam carpet underlay designed for use in UFH applications. It has more than 100,000 vent holes per roll, which gives a 10% open area direct to your carpet.

‘It’s proudly made in the UK and is made from recycled materials and recyclable after use,’ says the company. ‘Heatvent gives a luxury soft alternative to old fashioned heavy rubber underlay which is very fitter friendly.’

It’s available in two grades.
Heatvent 9mm (‘the fitters’ favourite’) – the 9mm option is made from high density 145kg recycled industrial foam. Top and bottom surfaces are finished in non-woven stabilising fleece for extra strength and stability. It’s passed fire resistance tests to 8S4790:1987 (2014) and has a functional tog of 1.2 and the roll size is 15sq m.

The company adds: ‘We also have a 10mm product – this boasts 10mm of soft comfort. It’s made from 86kg recycled foam. This makes Heatvent 10mm the most luxurious ventilated PU foam product on the market.

‘It gives a soft luxurious comfort underfoot and it has passed fire resistance tests to 8S4790; 1987 (2014) and has a functional tog of 1.3 and the roll size is 15sq m. So next time you need some UFH underlay for carpet, give it try, you won’t be disappointed.’

Spencer Chapman and his wife Sarah set up a carpet shop in 1996 and have seen many changes over the years, one being UFH coming into use. ‘Really the only underlay available to use under carpet on UFH was the dense rubber underlay which is quite hard underfoot and extremely heavy. So we have a friend who has a perforating machine and approached him to see if he could basically punch holes in underlay,’ says Spencer.

‘He said it was possible but he’d have to create the tooling which proved very difficult but was a success. They were 3/4 products on the market already of the same type but are all produced overseas so we wanted to produce a product that maybe had a more superior feel and that was made in the UK. We may not be a big concern but through our own experiences felt there was a gap for a UK-produced underlay with holes in.’
07860 647265
sales@heatventunderlay.co.uk
www.heatventunderlay.co.uk