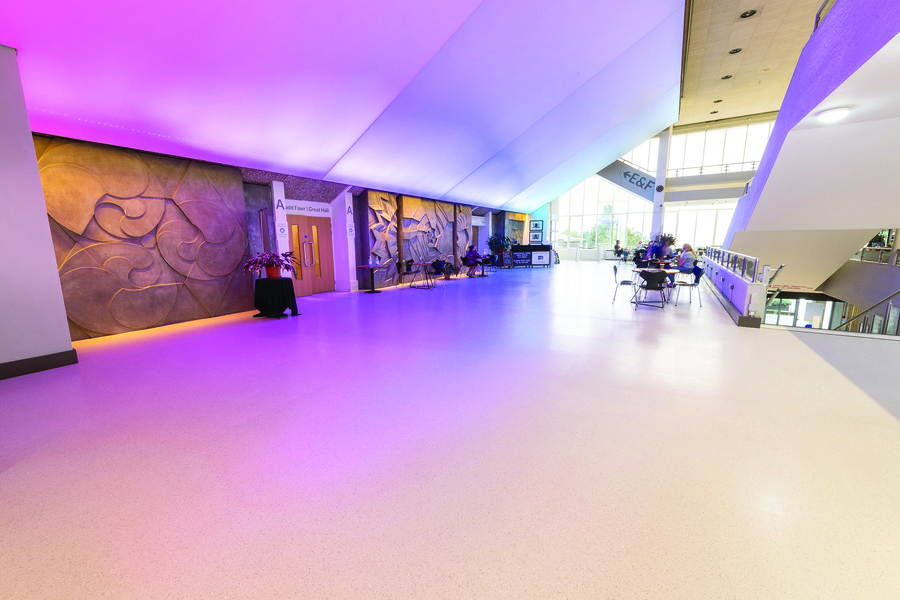 TECHNICAL representatives from F Ball & Co have reportedly provided contractors from John Lord Flooring, based in Bury, with what they describe as a cost-effective alternative to completely removing and replacing a weakened screed as part of a flooring refurbishment at the Aberystwyth Arts Centre, part of Aberystwyth University.

The company was contracted to install rubber floorcoverings over two floors of the centre’s main building, a total area of about 1,400sq m.

The building was built in 1970 and was extended in 2000. It was also subject to flooding in 2020. Both the ground floor and first floor had concrete substrates, and the first floor also had a small section of raised access timber flooring.

On removing old floorcoverings, flooring contractors were faced with an extremely rough screed with weak patches, possibly the result of poor installation or curing techniques, environmental factors, or age, that was unsuitable for the application of subfloor preparation products and the installation of floorcoverings.

Some weak sections were mechanically removed, leaving about 75mm thickness to be made up. A structural engineer confirmed that the concrete bases were, otherwise, structurally sound. New P5 chipboard was affixed to the wood subfloors with screws and glued at the joins.

It’s often necessary to completely remove and replace a weakened screed. However, F Ball technical representatives called on to conduct a site assessment were able to recommend a less costly and time-consuming solution to make the surface suitable to receive floorcoverings, including quickly raising the level of floors where sections had been mechanically prepared.

First, any remaining weak spots in the base would need to be removed by mechanical means along with any surface contaminants to create a clean, sound micro-textured finish. Any dust and debris should also be swept away.

Flooring contractors then used F Ball’s Stopgap 600 Base deep section levelling compound to raise the level of floors where weak patches of screed had been removed.

Most levelling compounds can be applied up to a maximum thickness of 20mm, whereas Stopgap 600 Base can be applied at thicknesses between 5-50mm, meaning only two applications would be required to achieve the required 75mm thickness. The product can also be pump applied, as the contractors opted to do, saving further time.

It was also recommended that the chipboard over the raised access floors was checked to ensure the surface was clean, secure, and undamaged before applying a minimum thickness of 0.2mm of F Ball’s Stopgap Fill and Prime over the entire area.

Says the company: ‘Stopgap Fill and Prime is a flexible cement-based primer, which has a thixotropic consistency, meaning it flows freely when stirred but sets to a gel-like consistency on standing, enabling it to fill joints between panels, preventing indentions that could transfer to the finished installation when a levelling compound is applied.

‘The whole subfloor area was then capped with a layer of F Ball’s Stopgap 1200 Pro high performance levelling compound to create a perfectly smooth base for the receipt of new floorcoverings.’

‘The adhesive develops the high bond strength required to hold floorcoverings in place when exposed to high temperatures, which are expected in heavily glazed areas of the university building. It is also fibre-reinforced to provide high initial grab to prevent floorcoverings moving when working.’ 
01538 361633
Twitter: @FBallUK
Instagram: f_balluk
LinkedIn: f-ball-&-co-ltd
www.f-ball.co.uk