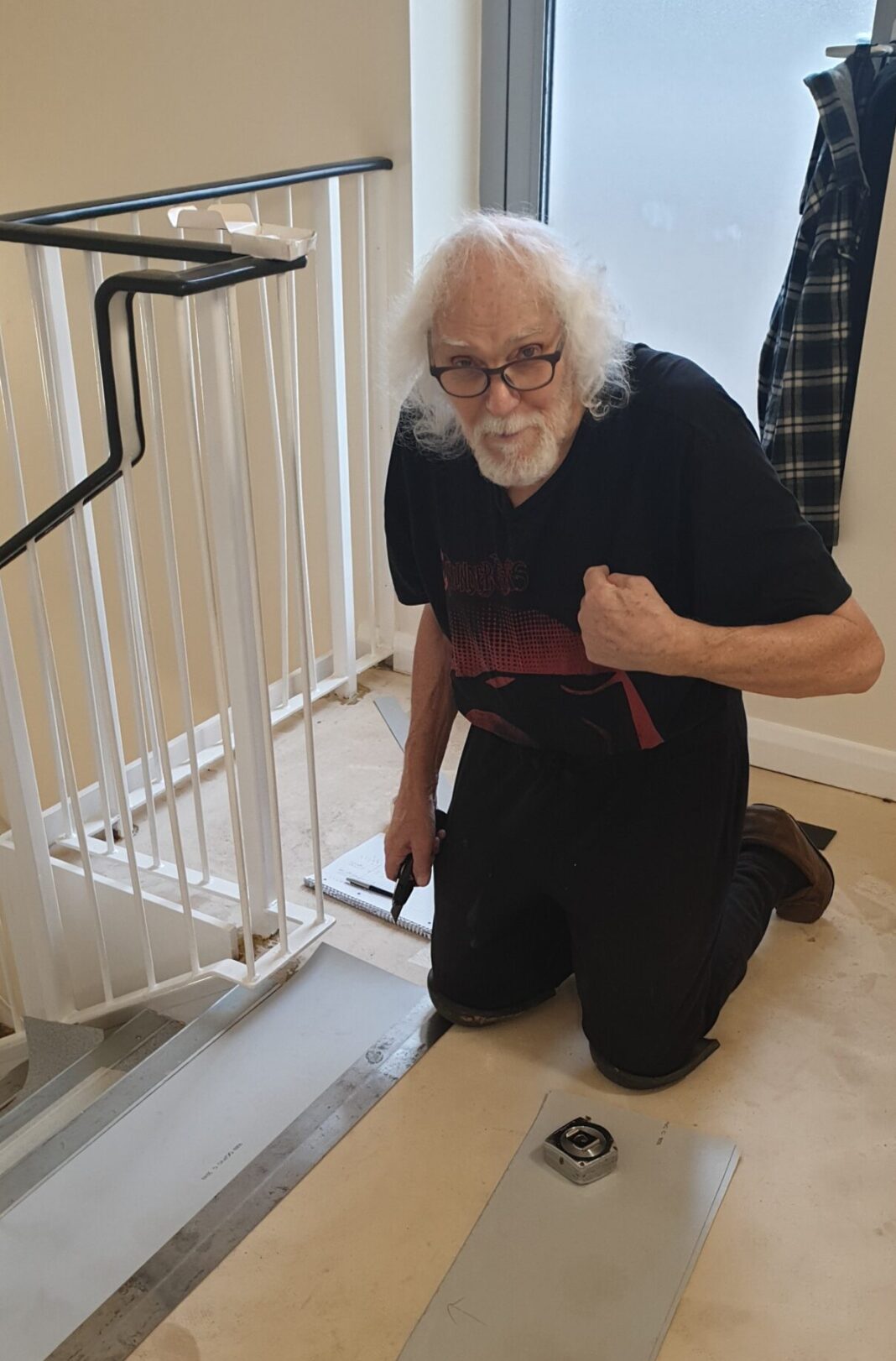 KEITH Shenton, the UK’s oldest floorlayer, has finally decided to end what has been a remarkable 70-year career in the flooring industry. The Nottingham-born flooring legend turned 87 in July.

‘As soon as I was forced by lockdown to stop working, I noticed a problem,’ Keith told CFJ. ‘I’ve been active all my life, so naturally when I slowed down, my body reacted by shutting up shop – especially noticeable when I tried to stand up. My knees weren’t having it.’

Keith’s last installation took place in December 2019, just as Covid-19 started to get a grip in the UK. It entailed working with Polysafe on landings, quarter landings and 14 flights of stairs in a seven-storey block in the East End.

‘In lockdown, nobody wanted to risk having a nearly 90-year-old guy working onsite, so there was no option but for me to stay home.’

Keith’s life story came to the attention of CFJ in 2018 when John Butler, founder of JBC Flooring, told me about a twentysomething floorlayer he’d worked with in Nottingham in the ‘60s. Decades later, John discovered Keith was alive-and-well in London – and, to his astonishment, still laying floors aged 84.

CFJ secured an interview with Keith at his workplace in Chingford industrial estate, and on my first interview with him I wrote: ‘I turned around to see the man himself walking up to me with an outstretched hand and a wide grin. To say Keith is difficult to miss would be an understatement. It’s not that he’s unusually tall but he does have presence. There’s the shock of silver hair which reminded me of an unruly mane, the hearty greeting, the mischievous twinkle in his eye. Bursting to tell me his stories, he made cups of tea and took me up to his tiny, jam-packed office on the top floor of the EFD offices.’

I was so impressed by his life story that we decided to serialise it in CFJ.

Keith was born in 1934. As a lad he remembers the sound of dogfights taking place in the night skies between the RAF and the Germans during the Battle of Britain. He started floorlaying in Nottingham in 1950 when he was 16, and was working on an installation in February 1952 when he heard the death of King George VI (the Queen’s father) announced on the radio. As a young man, he fought for the UK in the Korean War where he witnessed death and deprivation and later served in Japan. On his return to Nottingham, he took up floorlaying again.

After working for various companies and undergoing some difficult times, he decided to improve his prospects by moving to London where one of his jobs was fixing the carpet in the apartment of Ava Gardner, who he describes as a wonderful woman.

However, after several instalments of Keith’s story, complaints from some advertisers (who objected to their adverts appearing alongside it rather than near articles about new flooring products and case studies), forced us to leave Keith’s story in the ‘60s, not long after he took the then 16-year-old John Butler under his wing.

Nonetheless, Keith’s floorlaying career was commemorated at a ceremony in London for the 2019 CFJ/CFA Awards, when he was awarded CFJ’s lifetime achievement award and received a rousing standing ovation.

He’ll be back at the 2021 CFJ/CFA Awards at Coombe Abbey in Warwickshire where he’ll present the award for outstanding achievement in the flooring industry to an as-yet-unnamed person.

Despite the fact that in July he had a pacemaker fitted, Keith has no plans to slow down. ‘I’m going to turn my life story into a country and western song and travel around the US in a motorhome. Then I’m going to enter America’s Got Talent.’