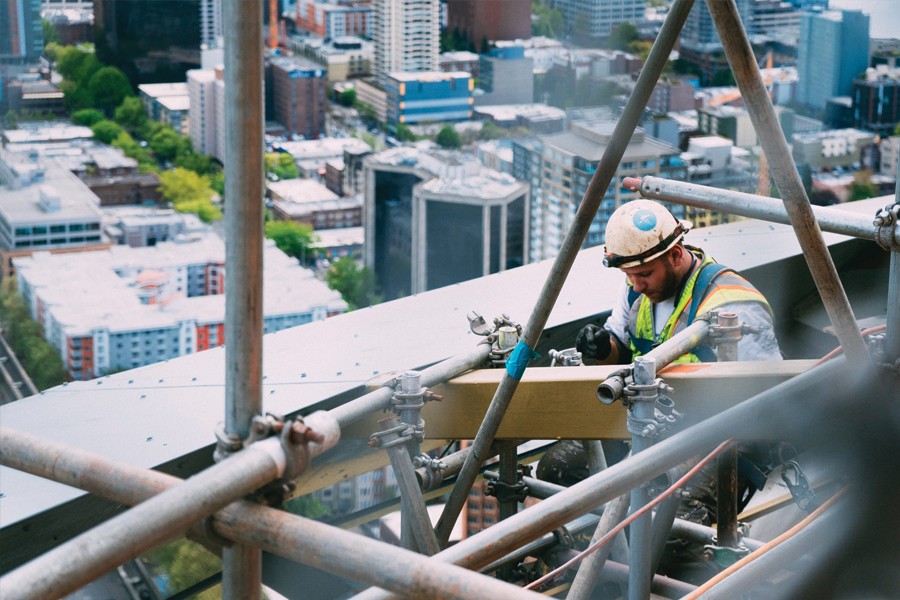 FINDINGS come alongside reports nearly half of employees have suffered from excessive stress over the last year, leading one in 10 to leave their jobs. Experts warn of risks to manual labour and service industries already hit by worker shortages.

Experts are warning we’re seeing a ‘burnout build-up’ in the UK’s workforce, which is likely to grow as we move into January. The past three months have seen a 200% spike in searches for ‘signs of burnout’, according to Google search data.

This is the culmination of a year of heightened risk of burnout among employees. Annual data shows a 28% increase in searches for ‘occupational burnout’ over the past 12 months – when compared to the previous year.

Experts are now urging HR and leadership teams in the construction sector to address the issue of workplace stress or risk losing employees, particularly as we approach mid-winter and January: mental health concerns often surge at this time of year. According to reports from the Confederation of British Industry, which represents 190,000 businesses, staff shortages in manual labour and service industries could last for two years.

Excessive stress is considered to be a major predictor of burnout and other mental health impacts. A recent mental health and employee stress study, conducted by Vape Club, surveyed employees from over 500 companies and found almost half of them (47%) have experienced excessive stress at work in the past year.

And this is becoming a big challenge for employers trying to retain their employees — one in eight have considered leaving their current job owing to excessive work-related stress in the past 12 months, and a further one in 10 have actually quit.

The research also uncovered some of the biggest impacts of excessive stress. Prominent effects described were:

When employees were asked about the support received from their workplace, one in every eight employees felt they didn’t receive the required support.

Impacts and implications of employee burnout
Staff-level employees were found to be most likely to experience excessive stress in the workplace, with 67% having suffered over the past year. This compares to 61% of employees in management roles, and 49% of company owners or directors.

However, those in management positions were found to be most likely to suffer from other mental health issues caused by work, such as anxiety or fatigue. One in five have experienced these problems over the past year, perhaps owing to increased pressure placed on middle-management personnel.

Indirectly, stress also leads to other health issues. Employees working in manual labour-related industries were found to be over 2.5 times more likely to smoke, according to recently released PHE data. In the engineering and manufacturing sector, one in five (21%) ex-smokers have relapsed to smoking over the last year.

Dave Capper, ceo at Westfield Health, says: ‘This shift in looking after wellbeing hasn’t just surfaced owing to added workload; the pandemic has made many people change their priorities.

‘Meeting these needs is important for personal wellbeing. We all have our own values and goals and if our workplace does not help us meet them, it negatively impacts our happiness, sense of achievement and mental health, all of which can lead to employees leaving or feeling burnt out.

‘Businesses now need to take some time to reflect and see whether they are offering their employees what they want and giving them what they deserve. These employees are the ones that have kept companies going throughout tough times, so evaluating ways to support them is vital.’

Bethany Smith, HR advisor at boiler suppliers and installers Heatable, says: ‘Supporting employees in adopting a healthy lifestyle shows that you care about their health and wellbeing, which itself improves morale and overall productivity. Beyond that, a healthier lifestyle has a range of inherent benefits. For example, there is plenty of evidence to support regular exercise improving mood and mental health.

Michael Christou, director at building, electrical, and gas service company Just A Phase, says:
‘One of the biggest strains on construction workers right now is deadlines, we’ve seen a large increase in materials shortages which means construction workers are forced to work longer and harder to catch up on the time lost owing to these shortages.

‘Most of these shortages are owing to Brexit with shipping delays being a major issue and has caused already squeezed project deadlines to be even more unrealistic and very unmanageable in many cases. Also, Covid-19 restrictions have played a part in the delays and shortages of delivery of materials. All of this funnels down to the construction workers on the ground as they’re pushed harder and expected to do more.