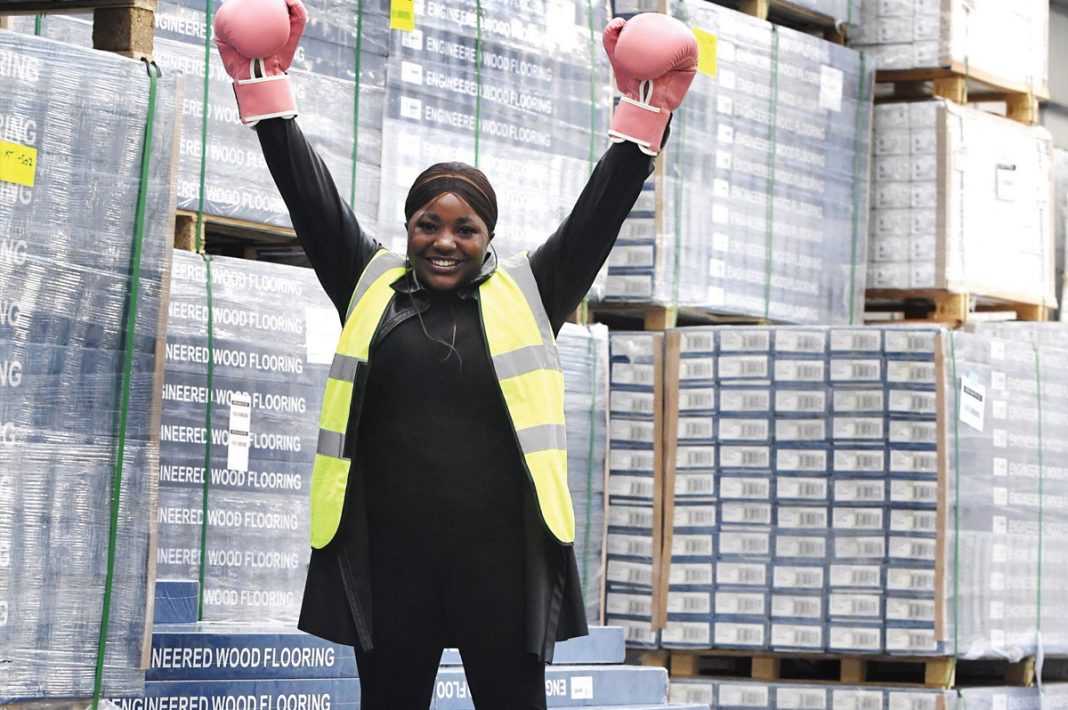 A NUNEATON mum who spends her working week surrounded by wooden flooring signed up for a boxing match in the name of raising money for a charity close to her heart.

UK Flooring Direct’s distribution administrator Bella Nyambayo, based out of the business’s Coventry office, competed in the white-collar fighting event held at 108 Boxing Coventry on Sunday 6 March.
The money she raised went to House of Light, a charity specialising in maternal mental health.

Bella first heard of their support for women affected by postnatal and antenatal depression and anxiety when she faced those struggles herself after giving birth to her baby boy, Theo, who is now two.

Bella wanted to make as much extra money as possible so she can make as much difference as she can to other mums going through what she went through.

Bella said: ‘The charity I’ve chosen is very personal to me. I was one of many mums, post-birth, who asked themselves – why do I feel like this? Until receiving diagnosis, many aren’t aware they have post-natal depression. It isn’t thought of or spoken about enough unfortunately.

‘I donned my boxing gloves and got in the ring to do my bit in spreading the word and make more people aware it’s okay not to be okay and there are many ways to feel the way you deserve. For anyone out there suffering in silence, know that there are charities like House of Light who are out there to help if you just reach out.

‘I’m beyond touched by everyone’s generosity and am also thankful for the support of my colleagues at UK Flooring Direct for helping me reach and surpass my target.’

As a key member of the UK Flooring Direct Distribution team, Bella directs her attention to overseeing the daily operations of the department. She’s been with the business since June 2019, after first working in customer services.

Post-fight, she plans to stick to the fitness routine she first established for herself after she gave birth – which consists of four gym sessions each week.

Faye Summers, HR director at UK Flooring Direct, said: ‘Bella is a much-loved member of the UKFD family. The fact she’s done this is reflective of her caring nature inside and outside of the business.
‘We’re proud of Bella for her fundraising efforts on behalf of a charity who do so much important work for women up and down the country.’
www.ukflooringdirect.co.uk