The benefits of using felt underlays 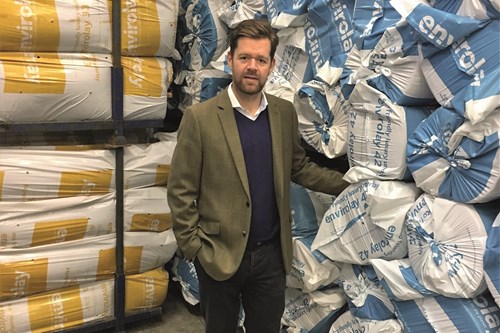 A good carpet underlay can prolong the life of a carpet so the choice of what type of underlay to use for the home or commercial environments can be a critically important decision, says James Taylor

A GOOD carpet underlay can prolong the life of a carpet so the choice of what type of underlay to use for the home or commercial environments can be a critically important decision.

As choosing a poor underlay detracts measurably from the life of a carpet. Investing in a higher quality underlay is the most cost-effective way of upgrading a carpet installation.

It’s usually better to spend an additional £2 per meter on underlay, than to upgrade the carpet by the same amount. The improved underlay will provide greater support for the carpet, and thus greater wear ability. It will also give a feeling underfoot of greater quality.

An inexpensive carpet with high quality underlay may well feel better than a high-quality carpet with cheap underlay. In recent years PU underlays, have begun to dominate the UK market because the rolls are light and the Polyurethane Foam used is very easy to cut.

However, felt underlay such as Envirolay is making a real comeback commercially and domestically owing to its inherent qualities and its eco-credentials.

Carpet fitters tend to influence the market when it comes to underlay as PU foam is light and easy to cut, but by doing this they take away the benefits of using felt from the end-user, not to mention the carpet industry.

Texfelt is a member of Carpet Recycling UK and it actively works with several carpet manufacturers and retailers to reduce the amount of carpet waste that would ultimately go to landfill at a cost to the retailer and the environment.

Texfelt reprocess pre-consumer waste and blends it with jute, polyester fibres and wool to produce Envirolay which comes in several different weights depending on the end use.

As it’s made from natural fibres, it doesn’t give of any harmful VOC’s unlike PU underlays and it also passes all formaldehyde tests whilst conforming to all British Standards. While being comfortable underfoot, Envirolay is an extremely functional product and is designed to give longevity as well as to not fail, especially in high traffic areas such as hotel foyers, functions rooms and bars.

Replacing carpets in commercial properties can lead to downtime and ultimately loss of trade so making the right choice now can have future benefits in the future.

Envirolay is used worldwide by hotel groups and this has been picked up by many architects, specifiers and retailers in the UK. By adding value to the underlay choice, retailers are seeing a rise in demand for an eco-felt that will stand the test of time while benefiting the property acoustically and thermally.

Wool felt
Felt underlay is a more traditional type of carpet underlay and a 42oz weight is used widely in commercial installations because it’s hardwearing and firm while providing exceptional support to the carpet. It’s environmentally friendly as it’s made from 100% recycled fibres, and has excellent thermal and acoustic insulation properties.

A quality wool felt underlay such as Envirolay which is produced in a range of types and grades by Texfelt in an ISO14001 accredited manufacturing environment using only sustainably sourced and 100% recycled textiles fibres giving a remarkably resilient carpet underlay which will support the carpet fully for many years while also providing high levels of thermal resistance.

Envirolay felt also allows air circulation allowing the carpets to breathe so moisture won’t be trapped under the carpet and the build-up of mildew is eliminated. Envirolay felt has market-leading fire retardant properties and gives off non-toxic ‘white smoke’ as opposed to toxic ‘black smoke’ which is usually emitted when rubber burns it also absorbs airborne and footfall noise to give a quieter home environment.

Envirolay felt won’t crumble owing to high foot traffic or wear from chairs with castors and will remain stable for years.

The main reason you don’t often see it available in retail stores is because carpet fitters generally like to install the quickest and easiest product which is lighter to carry and easier to cut with a Stanley knife, not necessarily what will perform the best for the consumer and give long-term support to its new carpet investment.

Envirolay high quality felt is suitable for domestic and commercial use such as living areas, bedrooms, stairs and landings where that extra touch of comfort and support are required. Envirolay is also highly recommended commercially and are widely sold for use in pubs, clubs, restaurants and hotels.

Envirolay provides excellent comfort and durability along with excellent heat and sound insulation properties. Envirolay felts are the only UK manufactured felt carpet underlays to be tested to show they don’t emit harmful VOC’s or have any formaldehyde content.

Felt/rubber
Combination underlay such as Envirolay+, Heart ‘n’ Soul & Sterling Royale have all the benefits of Envirolay felt while having the added benefit of a crumb rubber backing which provides superior support and protection against premature carpet wear.

It’s usual to fit combination underlays in heavy use areas where increased footfall, heavy furniture and wheeled baggage are common.
Not only does combination underlay prolong the life of the carpet in these situations, the crumb rubber backing also helps to reduce uneven subfloors showing through as its beds in.

Envirolay+ is the latest addition of the Envirolay range, it’s been designed for the commercial sector where price is key but the demand for a high-quality product is paramount.

Envirolay+ is a 9.5mm combination underlay that is produced in 10sq m rolls which allows for ease of transporting, lifting and manoeuvring.

Combination underlays are easy to cut with a Stanley Knife and they don’t roll back on themselves like cheaper PU alternatives which helps reduce the fitting time which is a benefit on a commercial installation.

A considerable amount of combination underlay is used in commercial applications, hotels, bars, cinemas and restaurants; however, it’s increasingly being specified in domestic builds where the demand for quality and function is a priority.

Like the Envirolay range, all the rubber used in Texfelt combination underlay is sourced from 100% recycled vehicle tyres which would usually end up in landfill.

By upcycling pre-consumer waste, Texfelt can offer a full range of eco-underlay products that conform to British Standards for commercial and domestic applications but also tick all the boxes for modern eco-building while being kind to the environment.

Carpets are installed on various underlays and while we know that in most cases an acceptable performance of carpet and underlay may be achieved, careful choice of underlay can enhance the performance of the carpet.

We acknowledge there’s a balance to be achieved between providing the right underfoot comfort and the right support to the carpet, and from our experience and evaluation of various underlays we would make the following points:

Higher density underlays
These give added protection to the carpet against the hard subfloor during normal walking. Indentations from furniture will be less severe where the carpet is fitted on a firm underlay. Firmer underlays will prevent excessive vertical movement and stretching of the carpet in use and will therefore help prevent rucking problems.

A softer product will collapse under the pressure and allow the carpet backing to be distorted, preventing good recovery and making indentations more severe.

Thicker, softer products have been seen to create dimensional stability problems in some installations where the carpet has stretched owing to the excessive vertical movement as the underlay is compressed during normal use.

This can cause problems on seams and ultimately lead to damage and early replacement of the carpet being required.