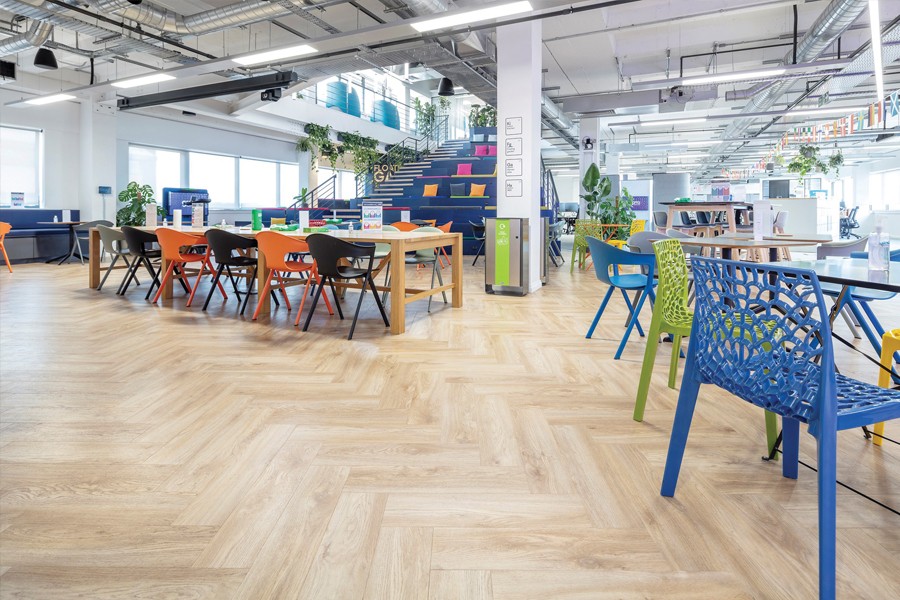 STUDIO Moods and LVTs from IVC Commercial are said to have added a homely atmosphere to the SKA gold-rated offices of Gama Healthcare, a sterile products manufacturer.

Gama Healthcare recently called on design and build company Oktra to transform its 1,860sq m Hemel Hempstead offices into an environment that supported its workforce with a homelike feel.
The answer saw a design inspired by bright and bold colours with an open space to encourage collaboration. At the heart of the scheme is a flooring layout to support the zoning of the space, using IVC Commercial’s Studio Moods and Moduleo 55 LVTs to ground the interior in nature and to add a calming and restful influence.

‘In particular, the team were blown away by the Studio Moods wicker pattern vinyl floor that greeted them at the showroom’s entrance and couldn’t believe the vinyl floor wasn’t real wood. Once they learned of the cost, longevity, and maintenance benefits, as well as the ability to create a truly unique design, we knew Studio Moods would be the floor to give a warm and homely feel throughout the offices.’

The team at Oktra went on to use Studio Moods in a Sierra Oak wicker pattern, combining it with IVC Commercial’s Moduleo 55 Impressive Sierra Oak planks laid herringbone.

Says the company: ‘Both floors deliver an authentic wood-effect, with Moduleo 55 Impressive also featuring EIR, a surface technology that perfectly recreates the texture map of its wood-effect design for a true-to-life feel.

‘IVC Commercial works with third-party organisations to verify the environmental impact of its products with Environmental Performance Declarations (EPDs).’
www.ivc-commercial.com