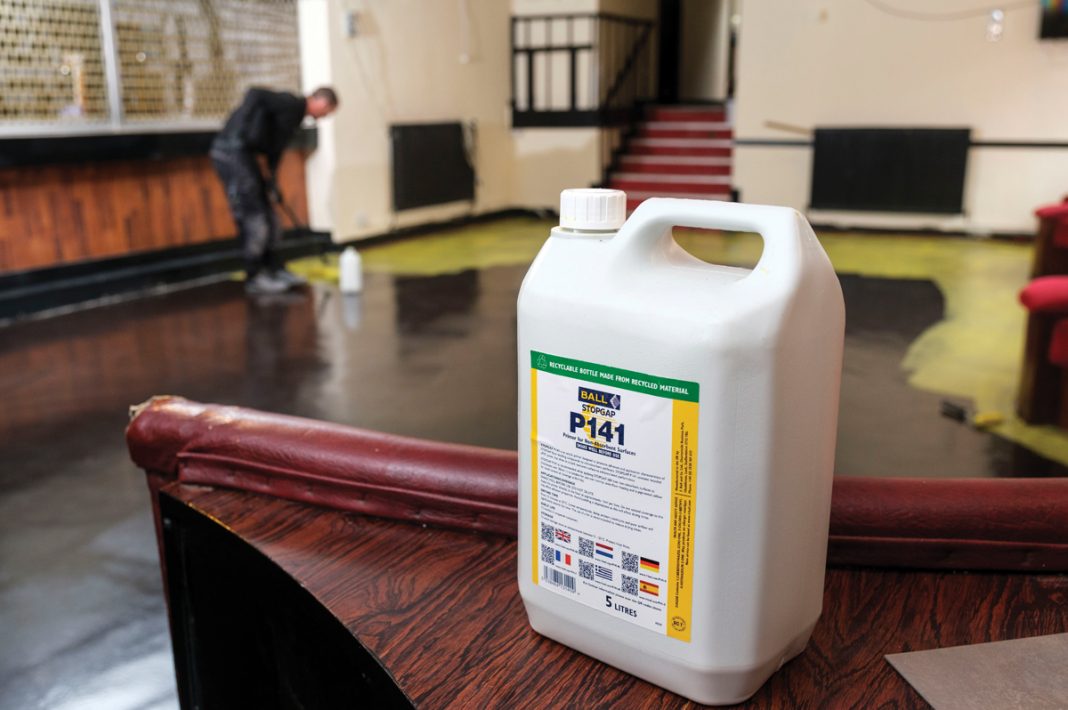 PRODUCTS donated by F Ball and Co, including the company’s Stopgap 1200 Pro levelling compound, have been used to prepare subfloors as part of the renovation of the Coventry Caribbean Community Centre prior to its reopening to coincide with Coventry’s UK City of Culture status last year.

Opened in 1983, the centre was established as a permanent base for what was the ‘Coventry West Indian Association’, which aimed to promote integration of members of the Windrush generation and the wider community. Apart from serving as a meeting place, the centre hosted events, including weddings, charity fundraisers, and Caribbean music performances. However, it had fallen into disrepair prior to the coronavirus pandemic.

A call-out for volunteers and sponsors was issued, with the aim of revitalising and relaunching the centre in 60 days. This was answered by instructors from the Amtico Training Academy in Coventry, who came forward to install luxury vinyl tiles (LVTs) in the 150sq m function room for free, with F Ball supplying the subfloor preparation products.

Installers therefore opted to use F Ball’s Stopgap 1200 Pro to smooth subfloors. The levelling compound can be applied directly over minimal, well-bonded old adhesive residues. In such applications, there is no need to prime surfaces beforehand. It’s also moisture tolerant, meaning that it can be used to smooth rough or uneven subfloors prior to the application of a waterproof surface. This avoids the liquid waterproof surface membrane pooling in undulations and necessitating a greater quantity of the product to achieve full coverage. It’s walk-on hard in as little as 60 minutes and ready to receive floorcoverings from four hours.

F Ball’s Stopgap F77 one-part waterproof surface membrane was then applied to prevent excess subfloor moisture attacking floorcoverings and adhesives, potentially causing complete floor failure. The product dries in as little as three hours to create a barrier against moisture values of up to 98% RH with a single coat application.

Once dry, the surface was primed using F Ball’s Stopgap P141, which is designed especially to promote the adhesion of levelling compounds to non-absorbent surfaces, including waterproof surface membranes, and coloured yellow to help guage coverage. Another layer of Stopgap 1200 Pro was then used to create a perfectly smooth base for the receipt of new floorcoverings.
Once the levelling compound had cured, Amtico Spacia ‘Metropolis Smoke’ stone-effect LVTs were installed in the majority of the floor area, with premium Amtico Form ‘Opal’ hexagonal tiles positioned around the bar area for visual interest.

Commenting on the project, Paul Ager, Amtico technical training instructor, said: ‘We were very pleased to offer our expertise to help with this invaluable community project. Using F Ball’s Stopgap 1200 Pro meant we didn’t have to mechanically prepare the subfloors, saving time and avoiding disruption to other trades, helping complete the renovation in the allocated timeframe.’
01583 361633
www.f-ball.co.uk