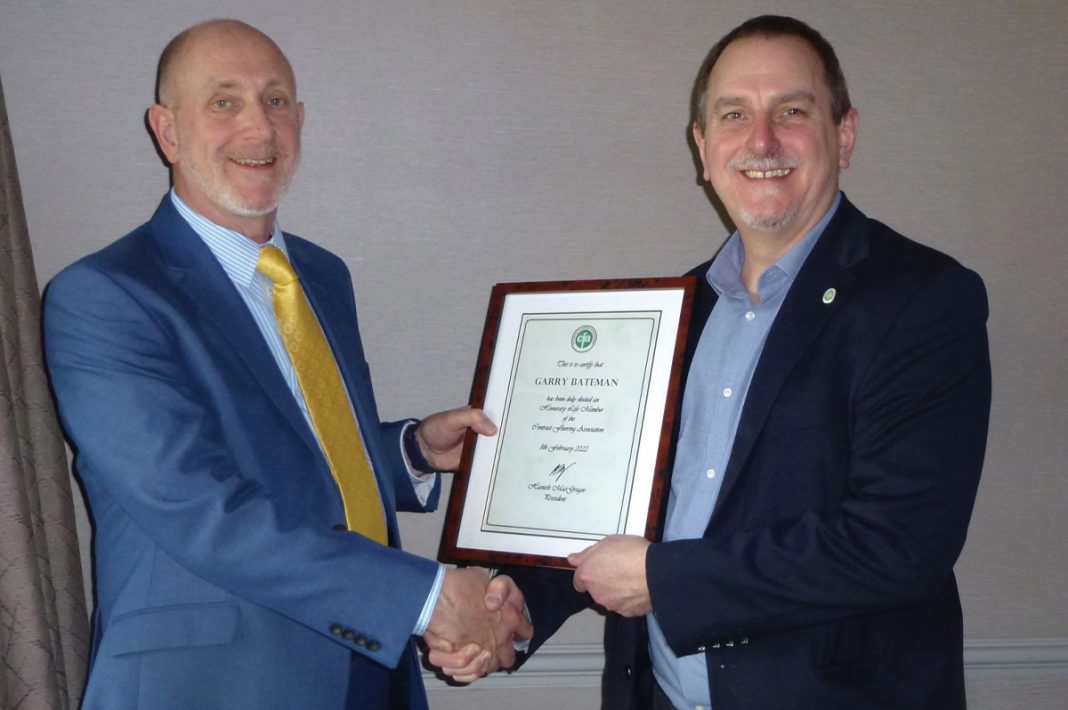 The CFA has held a successful Manufacturers’ Committee meeting in a hybrid format, with participants split between those physically in attendance and others joining online.

This was Garry Bateman’s last meeting as Chairman, in view of his retirement from Forbo, having chaired these meetings for the past ten years. He gave a brief overview of his time as Chairman and stressed the importance of the Manufacturers’ Committee. This is illustrated not only by the content discussed at the meetings but by the regular attendance of so many members.

Garry went on to say that meetings have become particularly important in order to maximise communication between manufacturers, especially at a time when there are so many serious issues going on simultaneously.

Richard Catt moved thanks to Garry for all his hard work on behalf of the CFA and presented him with a certificate confirming his honorary membership of the CFA, an award bestowed on past Presidents as they retire.

The main presentations for the meeting were from Shaun Wadsworth, CFA Training Manager, and David Strydom, Editor of CFJ.

Shaun presented a CFA response to the skills and labour shortage. Increasing the skills and labour in our industry and specifically supporting members in finding more floor layers is the CFA’s main project for the 2022/2023 year. Shaun outlined a number of ways that CFA contractor members will be receiving support and provided information on ways that manufacturers can also help.

The CFA is determined to tackle the skills and labour shortage and has identified four key objectives to improve the situation. These are: improving the pipeline of new workers, expanding localised training provision, increasing overall employer demand and identifying new industry and financial support.

Further details are available for members on all these initiatives by contacting the CFA office on 0115 941 1126 or email info@cfa.org.uk.

David Strydom talked about this year’s CFJ/CFA Awards, entries to which have closed since the meeting. The Awards night itself will be held at Combe Abbey on 9 September and will be hosted by comedian Jo Caulfield. The Awards will be divided into two categories – installations and product/individual achievement. The Apprentice of the Year Award, run by the CFA, will also be included and this year all entrants to the installation category will also be able to enter their project into the Sustainability Initiative of the Year Award.

Participants at the meeting were also made aware of the CPA Briefing Documents on Sustainability. CFA members are sent regular updates on all CPA information, including their valuable and widely respected economic data.

Extended Producer Responsibility, particularly with regard to packaging, was also mentioned, along with the fact that a new Government initiative on this which was due to come in during 2023, looks as though it is going to be delayed. People should be aware that this is separate from the Plastic Packaging Tax, which came in at the start of April, and which is also the subject of a CPA Briefing Document. Further details are available to CFA members via the CFA office or the Members’ Area of the website.

Major projects currently underway include the new CFA Guide to Insulation which is due for publication soon. A new guidance note on UFH is also being planned. If you would like to contribute to any of this work, please contact the CFA Office on info@cfa.org.uk. Technical documents are both a good way to support the industry and at the same time ensure developments in specific areas are properly represented. Many CFA technical updates are eventually reflected in the appropriate British Standard.