How To Reduce Echo In An Office 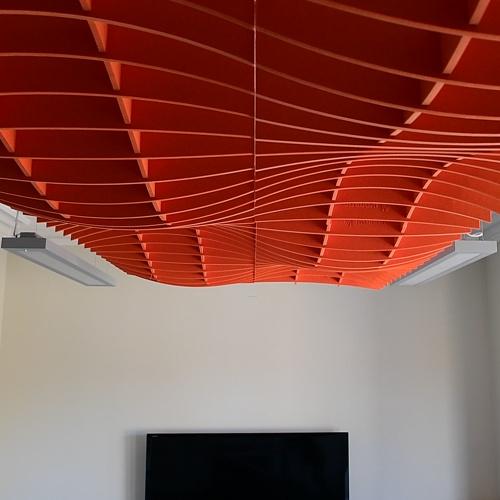 iKoustic were contact by Savills in York to review their boardroom in which holds both private meetings and conference calls. One of the primary issues was that it was at times difficult to understand speech because of the effect of reverberation within the space.

The boardroom is larger than your common modern office boardroom, with the measurements being;

With the hard, reflective surfaces and size of the room, the reverb time was modelled at 3.09 seconds which is shown below:

Some examples of desired reverberation time from BB93 are as follows;

Research in to Reverberation and its effects

With internal acoustics there are a lot of considerations to factor in which can affect the quality of sound within the room. In many cases within an office environment its poor acoustics contribute to speech privacy, speech intelligibility (the clarity of speech) and productivity issues regarding sound distractions – with research being relatively sparse in comparison other building considerations, we look at treating reverberation as a way of improving speech intelligibility, especially on this project.

The indoor sound environment and human task performance: A literature review on the role of room acoustics Jikke Reinten a, b, * , P. Ella Braat-Eggen b, c , Maarten Hornikx b , Helianthe S.M. Kort a, b , Armin Kohlrausch b [2017]

Our discussion with Savills involved a few different ideas of both placement of our Sound Absorption products, which we have included below through rendering, this is to show the customer the possiblities of matching specific colours to the interior design.

The interior designer had placed a set of Orange chairs within the space, we used this as an opportunity to help draw those together visually with our 3D Note™ Adagio in Zenith (Orange)

Option 2 with 3D Note™ Adagio in Flatiron and Popped Note™

Option 3 with 3D Note™ Adagio in Zenith and Minim

With the above options, the customer had decided to use option 3 and using an image they had selected to be printed on to Printed Note™ (which is customisable to any image). With the curvature of the 3D Note™ Adagio and it’s current design, it creates an aesthetically appealing wave that is continuous – this requires a lot of precision fixing and measurements to make sure there is little tolerance in the wave to create the desired effect. Also included to Option 3 was 2 additional Soft Note™ 50mm (Unwrapped) in white at 2m x 1.2  these are not sure on the visualisations as these were added after to further improve the internal acoustics

In relation to our modelling of Reverb Time in the background section, we looked to have fewer panels direct fixed and created suspension from the ceiling with adagio which allows more surface area for absorption into the room (by this we mean that a direct fix MuteSpace will only yield front and sides exposed to reduce the noise issue).  Acoustically speaking, a suspended baffle yields better performance for absorption.

The results we obtained were subjective measurements (so no reverb test was carried out post installation) which is quite common, as it is in most cases very noticeable in performance – you can see our testimonial below from their Director – Stuart Jeffries

“Thank you both very much for the artistic input – the images look fantastic and really lift the room.  The orange ceiling also ties in very well with the chairs, and again picks up the colour in the pictures on the wall.  I have yet to have a big meeting in there but was in there for a small meeting earlier today and the sound difference was very noticeable – so much better than previously.

All staff are very positive about the images, some find the ceiling a little on the bold side, but I think it looks great.” – Stuart Jeffries, 2018