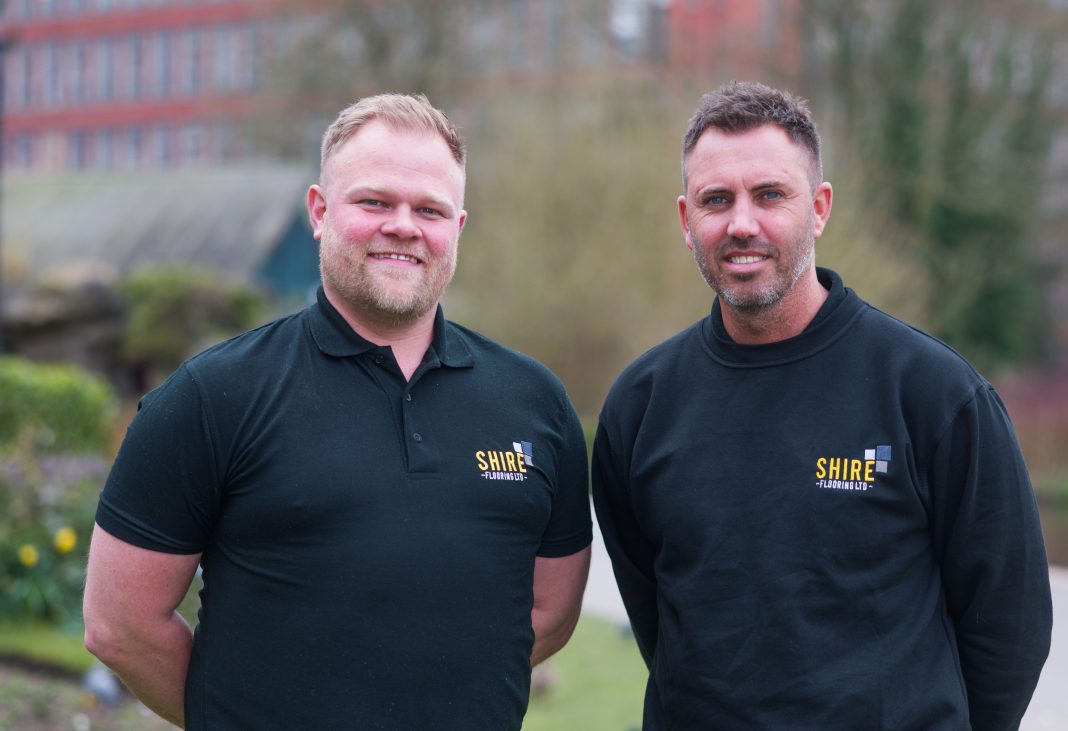 CFJ editor, David Strydom, interviews Shire Flooring, a young, fiercely driven Derbyshire-based flooring contractor which has its sights set on national domination. That may sound ambitious, but underestimate them at your peril.

I didn’t realise how many times Jordan McRobie referred to Shire Flooring, the company he co-founded, as being lucky until I transcribed the recordings of my interviews with him. Shire had been ‘lucky’ because it signed up for a house near London just before Covid-19 forced the first lockdown in March 2020, Jordan told me during our first interview. That meant the company wasn’t affected by hotel closures and so its floorlayers could continue their projects, safe in the knowledge they were abiding by lockdown rules.

At our second interview, I heard that Shire had been ‘lucky’ because despite soaring inflation caused partly by bottlenecking supply chains, its suppliers hadn’t exploited it by doubling their prices overnight. Yes, prices had increased but it could have been much worse, Jordan explained. And, he added, the company had been ‘lucky’ because none of its clients, primarily main contractors, had at that point gone into administration or denied it its profit.

Perhaps they have a different definition of luck in Derbyshire, but as far as I know, it’s defined as opportunity meeting preparation. Even Bruce Lee had something to say about it: ‘You have to create your own luck. Be aware of the opportunities around you and take advantage of them.’

It occurred to me that maybe Shire was ahead of the curve on Covid-19: what if, sensing that the global plague was about to reach our shores and not wanting to needlessly lose out on its big projects near London, it organised the house in order to avoid having no lodgings when hotels closed? And what if, instead of being lucky that it hasn’t been screwed over by its clients and suppliers, it’s actually been quite canny about the ones with whom it’s chosen to do business?

Having met Jordan and his team in Belper, I’m inclined to believe that the traditional description of luck (think winning the lottery thanks to a random set of numbers) is something that doesn’t apply to Shire. This company, it’s clear, makes its own luck.

I first came across the company’s name in 2019 when it was a finalist in CFJ’s inaugural installation awards. Back then, it was shortlisted for the Best Flooring in a Hotel category for an installation at the Marriott Hotel in Milton Gate, Oxford with Forbo Flooring Systems. Late last year, with a couple of manufacturer-related appointments already booked in the surrounding counties, I thought it would be a good opportunity to visit a Midlands contractor and see how it was emerging from the lockdowns and because Shire is a CFA member, I quickly found their contact details in the CFA Members’ Handbook.

Most contractors I spoke to said they were simply too busy to spare an hour with their friendly industry hack, even if it meant loads of free publicity. Given how busy tradespeople were after the lifting of each lockdown, that came as no surprise. But it made me all the more grateful to those contractors who said they had time to chat despite being rushed off their feet.

Jordan seized on the opportunity but as he was about to embark on a long-delayed, much-deserved holiday near Alicante in Spain on the proposed dates, we scheduled a Zoom instead, with a potential site visit planned for later in the year.

A glance at Shire’s website describes an ‘established flooring contractor based in the Midlands operating UK, nationwide’ which ‘endeavoured to exceed your expectations at all times’. As flooring contractors, Shire says it offers ‘a complete range of flooring services, including installation of vinyl, carpet, ceramics, laminate, rubber, entrance matting, commercial, and industrial hardwood flooring’. Its range included such illustrious brands as Amtico, Karndean Designflooring, Polyflor, Tarkett, Balta, Altro, Ege, and Burmatex’.

So far, so good. But it was Shire’s client list which really caught my eye, its diversity ranging from Aston Martin, Honda, Jaguar, and Mazda to the likes of Marriott Hotel & Resorts, Premier Inn, Amazon, McDonald’s, and Royal Mail – to name a few. I was interested, above all, to find out how a fledgling business had managed to amass such an impressive CV in such a short space of time.

‘We’re pretty new to the marketplace, so we’re keen to get our name out there,’ said Jordan when we connected on Zoom. ‘Making a success of Shire has been a steep learning curve – we’ve had to grow robustly but not too quickly, and that’s required a delicate balancing act.’

Jordan is exactly what I’d expected from a man in his position – straight-up with characteristic northern directness but also affable and in most respects just a regular guy on the cusp of 40. But look closer and you’ll sense a restlessness and a glint in the eye that betrays his ambition. As he answered my questions about Shire’s past, his mind seemed focused on the future – ever onwards and upwards. Here’s someone, I thought, who knows exactly where he’s going, and his foot’s not coming off the accelerator until he gets there.

A case in point: Shire has grown from only three people to 10 since January 2020, and now ‘more desks are going to have to be put into our offices’, says Jordan. It’s a good problem to have.

‘So,’ I said, ‘let’s hear your story from the beginning.’