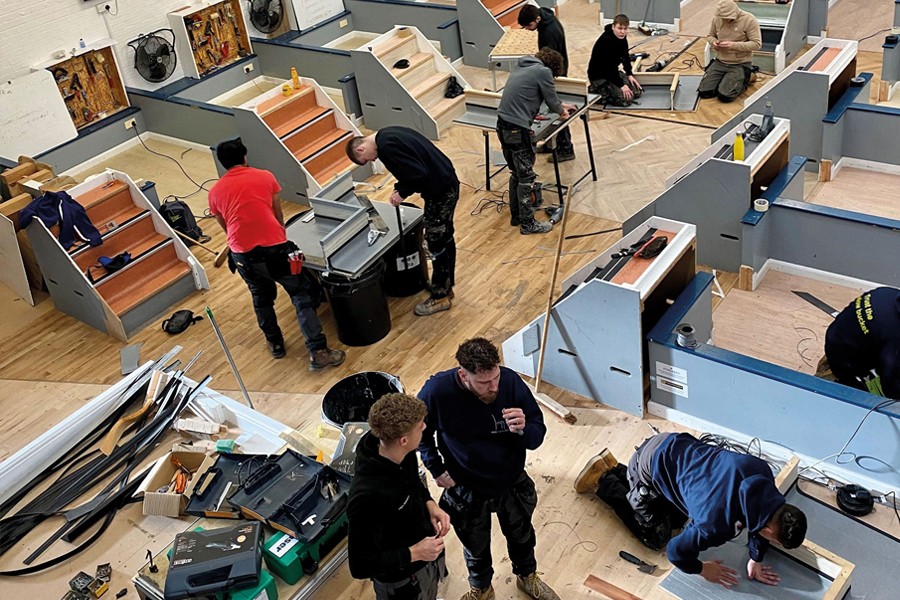 On 17 January 2022, the company took on its first cohort of 10 16- to 18-year-old apprentices under a new block release training scheme launched as a joint venture between Flooring Industry Training Association (FITA) and Webs Training.

The apprentices, based around the UK, will attend the FITA training centre in Loughborough for practical training for one week in every eight. In between – over the course of the three-year apprenticeship scheme – they’ll train with one of Designer Contracts’ employed or subcontract fitters.

FITA is also creating a bespoke Designer Contracts’ training standard so the company can assess and further develop its trained, employed fitters.

The move follows a growing labour gap and skills crisis over the past two to three years which has seen the emergence of a ‘bidding war’ for the shrinking pool of available fitters.
Said Louise Walters, commercial director for Designer Contracts: ‘The decision to take on 10 apprentices – with plans for a further 10 in 2023 – represents a significant moment for us as a company as well as the new industry training initiative.

‘Apprenticeships and further training are one way in which we can tackle the chronic skills shortage. As a company we have also been recruiting and directly employing more fitters rather than relying solely on contractors. Over the past two years we have taken on more than 25 fitters, many of them in the past 12 months – and going forward our plan is to directly employ even more.

‘We still have around 300 contract fitters on our books but as many in the industry will know, accessing this pool of trades people has become increasingly difficult over the past three years.

‘The CFA has been leading this drive for more training and, through FITA, started delivery of apprenticeships in Loughborough in May 2021 with its first intake of 20 apprentices
‘We are delighted to be supporting this industry initiative with the largest single intake of apprentices by any one company in the country. It represents a real investment in and commitment to the future of the industry and, as a CFA director and committee member, we are fully behind this scheme.’
www.designercontracts.com