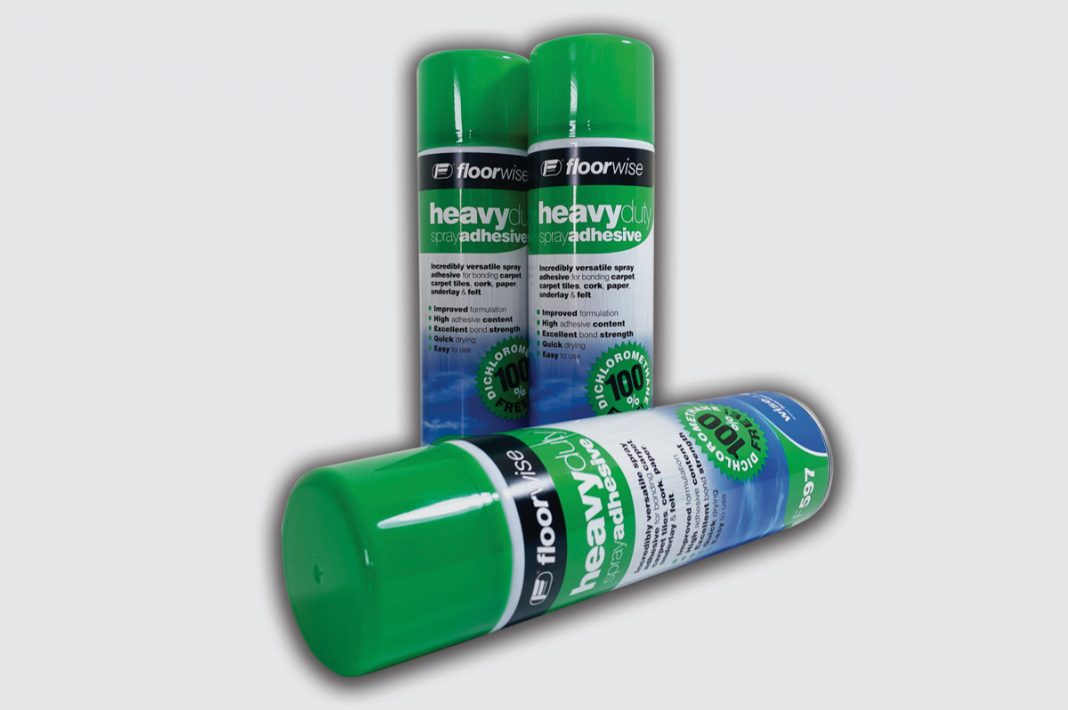 FLOORWISE has announced the launch of its F597 Heavy Duty Spray Adhesive. The company says this new product eliminates dichloromethane from its formulation making it safer to use and kinder to the environment. ‘This means floorwise F597 requires just one warning symbol on the can for flammability.’

Andrew Gill, group product manager, floorwise said: ‘Some years ago, we launched our F599 spray adhesive which has become a gold standard for the industry. Our objectives for developing F597 were to remove the health risk from dichloromethane and make it kinder to the environment without losing the fabled performance of F599. We’re really excited with the launch of F597 as it achieves all these objectives.’

The company continues: ‘F597 removes the hazards associated with many spray adhesives of being potentially carcinogenic and harmful to the environment. The other significant benefit of F597 is that, unlike dichloromethane, the solvent used is lighter than air and so will disperse faster into the atmosphere, rather than remaining trapped at ground level. The layer of invisible, odourless gas left at ground level by dichloromethane has been proven to create a significant risk of asphyxiation for installers working on their knees in poorly ventilated spaces.

‘Better still, these gains haven’t come at the expense of product performance as floorwise F597 still has the same high adhesive solids content of F599. The result is a spray adhesive with excellent bond strength and unrivalled coverage in every can delivering a strong, fast hold across a wide range of floorcoverings and accessories.’

Andrew says: ‘We say ‘Fantastic floors start with floorwise’. As such, we’re always looking for ways to improve on our existing products and the introduction of F597 with its dichloromethane-free formulation that poses no risks to health or the environment clearly demonstrates this commitment. In our pre-launch trials, we received great feedback on initial grab with installers noting excellent stringing, as well as a high longer-term bond strength as users have come to expect with F599.

‘We genuinely believe F597 is one of the safest heavy-duty spray adhesives on the market – highlighted by just one warning symbol on the can. However, while flooring installers need safer and healthier alternatives, they can’t afford to compromise quality and reliability, so we’ve made sure F597 is just as easy to use as the market leading floorwise F599 adhesive.’

Andrew concludes: ‘The introduction of floorwise F597 Heavy Duty Spray Adhesive represents a safer and healthier working future for installers without compromises in usability or performance. We’re delighted to add it to our line-up of spray adhesives. Keep your eye out for the bold green boxes and cans of floorwise F597 Heavy Duty Spray Adhesive at floorwise distributors across the UK and Ireland.’
01509 673974
wiseup@floorwise.co.uk
www.floorwise.co.uk