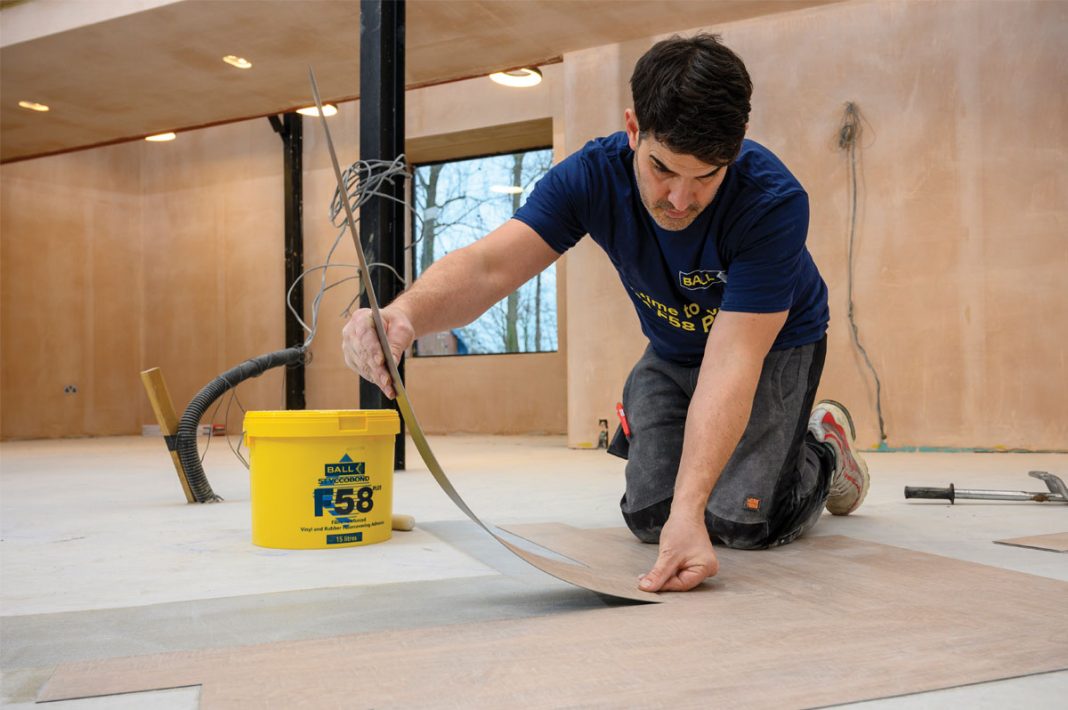 Contractors from 4 Floor Fittings began by thoroughly vacuuming the building’s concrete subfloor to remove dust and debris. F Ball’s technical service team recommended treating the subfloor as a newly installed screed for the purposes of moisture management, despite being installed months earlier, as it had been left exposed to the elements since.

Says the company: ‘The company’s Stopgap 300 HD heavy-duty levelling compound was then applied over the entire ground floor to create a perfectly smooth base for the receipt of floorcoverings. The product’s high compressive strength and excellent self-levelling properties help create a flawless finish when installing LVTs, while ensuring a long-lasting, aesthetically pleasing floor finish even when subject to high levels of wear.’

The contractors then used Styccobond F58 PLUS and F Ball’s Styccobond F49 Hybrid PS temperature- tolerant, moisture-resistant, pressure-sensitive adhesive to install wood-effect LVTs over the 372sq m area. Styccobond F49 was used where floor-to-ceiling windows were likely to cause temperatures to rise significantly as a result of solar gain. The adhesive will reportedly hold floorcoverings firmly in place when subject to extreme temperatures and temperature changes (from -20deg C and up to +60deg C), which can cause floorcoverings to expand and contract significantly, leading to tenting and gapping at the edges of LVTs over time.

Styccobond F58 PLUS was used to install vinyl tiles everywhere else. Says the company: ‘The fast-track adhesive enables floorcoverings to be installed from as little as five minutes after application, transitioning from a wet-lay adhesive to become fully pressure-sensitive.

‘Reinforcing fibres in the formulation provide resistance to lateral movement, holding tiles firmly in place and reducing the potential for them to slide around when working. The adhesive’s high bond strength and strong initial tack also prevent excess adhesive oozing between joints, facilitating easier application.

‘The products used in this installation feature in the company’s System LVT range: subfloor preparation products and adhesives which, used in combination, can help achieve optimum results when installing LVTs.’

Commenting on the project, Richard Argyle of 4 Floor Fittings, said: ‘It’s the best screed I’ve ever done. The levelling compound had no imperfections whatsoever. Styccobond F58 PLUS allowed floorcoverings to be installed over large areas in one go while helping with the precise alignment of LVTs. The result is a visually striking finish in keeping with the rest of the project.’
01583 361633
Twitter: @FBallUK
Instagram: f_balluk
LinkedIn: ‘F. Ball and Co. Ltd.’
www.f-ball.co.uk