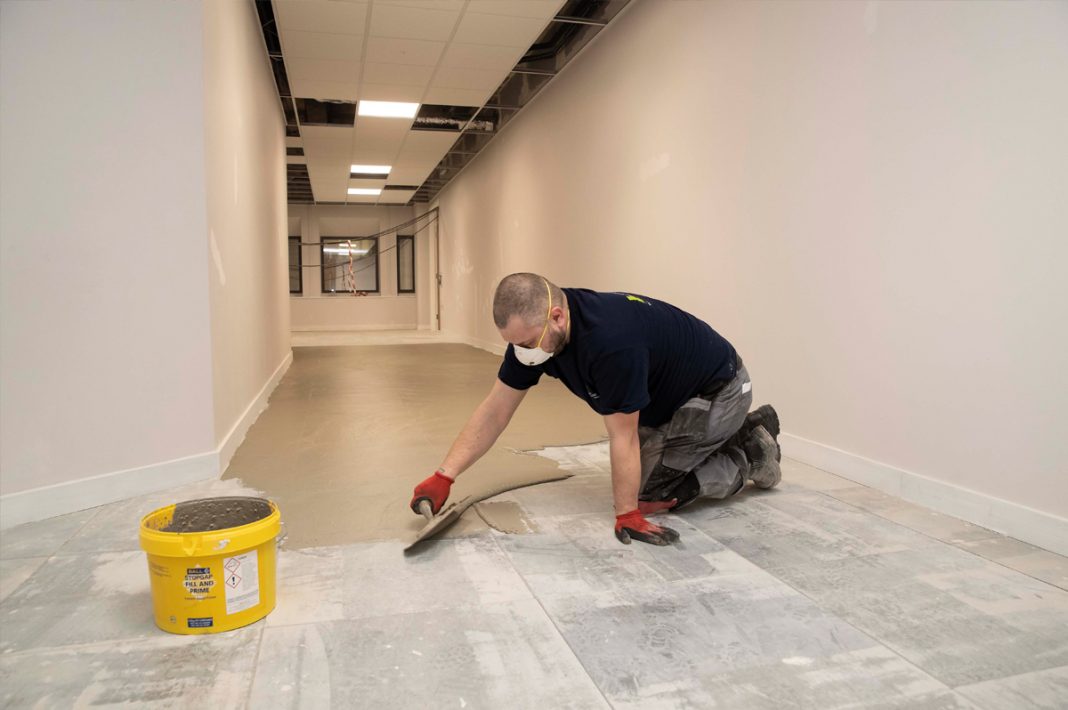 RAISED access panels are commonplace in commercial environments because the elevated structure provides space beneath for electrical wiring and other services found in modern offices.

However, a few special considerations are required when working over this type of subfloor to ensure the optimum visual appearance of the finished floorcovering and longevity of the installation.

When installed, raised access panels have small gaps or channels where individual panels meet. It will be necessary to fill these gaps, as well as holes caused by screws used to affix wood panels to a substrate, so they don’t transfer to imperfections in the appearance of the finished installation. This is no more important than when installing thin resilient floorcoverings, such as luxury vinyl tiles (LVTs).

Priming is also important when working over raised access panels. When used over non-absorbent subfloors, such as metal panels, priming serves to promote the application characteristics of subsequently applied levelling compounds.

When used over absorbent subfloors, such as panels made of cementitious materials, priming also serves to promote adhesion, as well as preventing levelling compounds from drying too rapidly, resulting in a reduced working time. It also helps prevent pin-holing, caused by tiny bubbles resulting from the slow escape of air from the subfloor, which burst on reaching the surface, leaving small pinholes or craters as the levelling compound dries.

Two in one
Similarly practical in office environments are carpet tiles. When installed using a carpet tile tackifier, such as F Ball and co’s Styccobond F41, individual tiles can be easily lifted and replaced when they become stained or worn – in walkways or areas occupied by chairs with castor wheels, for example.

When working over raised access panels, cement-based primers, including F Ball’s Stopgap Fill and Prime, are available that fill the gaps between flooring panels while simultaneously priming the subfloor, saving valuable time. They have a thixotropic consistency, meaning they flow freely when stirred but set to a gel-like consistency on standing, enabling the joints to remain filled. They’re also suitable for use over well-bonded, waterproof adhesive residues, prior to the application of the recommended levelling compound.

Case study
F Ball’s Stopgap Fill and Prime and Styccobond F41 have reportedly helped create a professional flooring finish over wood and metal raised access panels as part of a refurbishment to create new office space for a government service in Liverpool.

Contractors from HB Flooring, based in Sutton Coldfield, used Stopgap Fill and Prime and Stopgap 1200 Pro levelling compound to prepare subfloors before installing a combination of luxury vinyl tiles (LVTs) and carpet tiles over one floor of the building, totalling 2,500sq m.

Once the primer had cured, F Ball’s Stopgap 1200 Pro levelling compound was applied to create what’s described as a perfectly smooth base for the installation of the LVTs. Stopgap 1200 Pro is a two-component levelling compound for preparing sound internal subfloors that is reportedly suitable for use over old adhesive residues (including bitumen and carpet tile tackifiers). It’s also said to be fast-drying and fast-setting, allowing floorcoverings to be installed in as little as four hours after application.

Says the company: ‘Styccobond F41 ensures carpet tiles are held firmly in place when subject to lateral movements, such as everyday foot traffic and equipment being wheeled around, while allowing them to be easily lifted vertically if they need to be replaced at a later date. The adhesive is solvent free and, as testament to its ultra-low VOC emissions, certified EMICODE EC1 Plus.

Commenting on the project, Chris Helliwell, director at HB Flooring, said: ‘We used Stopgap Fill and Prime on the recommendation of our F Ball technical representative to overcome the need to overboard the raised access flooring with plywood, which would have been very time consuming. We’d never used it before, but it did exactly what we needed it to do. This allowed us to hand over the project on time, despite delays getting onsite.’
www.f-ball.co.uk