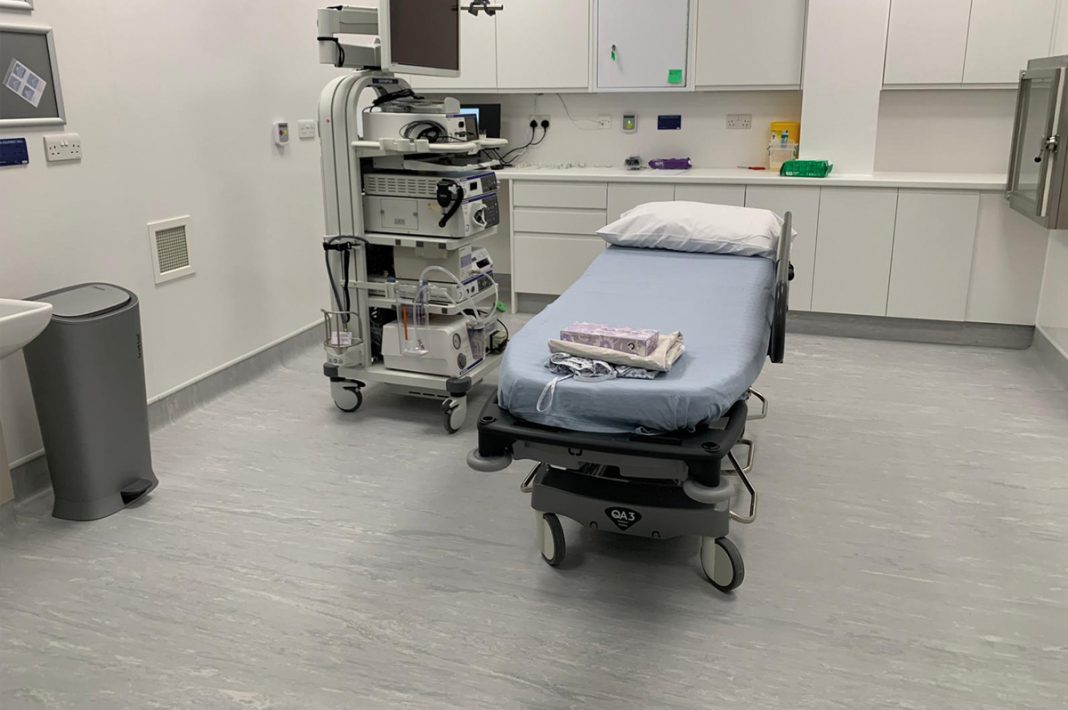 ‘HIGH-PERFORMANCE’ products from F Ball and Co have been used to install safe and hygienic flooring in a London hospital as part of a major refurbishment.

Contractors from RSW Projects were commissioned to install Tarkett Safety vinyl sheet throughout the hospital, a total area of 1,845sq m.

Work on the ground floor commenced with the uplifting of existing vinyl floorcoverings and the scabbling and cleaning of the concrete substrate to remove the majority of old adhesive residues. A moisture test found that relative humidity levels in the subfloor were 72%, just below the maximum 75% threshold above which a moisture management solution would be required to suppress excess subfloor moisture and prevent potential floor failure.

This meant contractors could proceed with the flooring installation without applying a waterproof surface membrane.

Says F Ball: ‘To provide a perfectly smooth base for the new floorcoverings, contractors applied F Ball’s Stopgap 1200 Pro high-performance smoothing underlayment at a depth of 3-5mm throughout the ground floor. The fast-setting, fast-drying smoothing compound is suitable for preparing sound internal subfloors. Its protein-free formulation makes it suitable for use in clinical and biologically sensitive areas, such as hospitals, laboratories, and clean rooms. It can also be used over old adhesive residues, without the need to prime subfloors beforehand.

‘Once cured, contractors proceeded to install Tarkett Safety vinyl sheet floorcoverings throughout the 1,050sq m floor in clinical rooms and corridors, using F Ball’s Styccobond F46 adhesive. The solvent-free, pressure sensitive adhesive was trowel applied before being rolled with a paint roller, pre-coated with the adhesive, to obtain a smooth, uniform appearance and minimise the chance of adhesive shadowing through floorcoverings. The floorcoverings were then laid into the adhesive after it had dried to a firm tack.’

On the first floor, where a plywood subfloor had been installed, contractors used the same floorcoverings but selected F Ball’s Stopgap 700 Superflex fibre-reinforced, flexible levelling compound to prepare the 795sq m subfloor.

They first primed the surface using Stopgap P131 primer. Priming absorbent surfaces, such as plywood, promotes the application characteristics of subsequently applied subfloor preparation products and stops the unacceptably rapid drying of levelling compounds, which can reduce their working time.

Flexible subfloors such as metal and plywood, can move when subjected to normal foot traffic and expand and contract naturally as a result of fluctuations in temperature. These movements can cause cracks in general purpose levelling compounds, which can begin to show through floorcoverings over time and possibly result in floor failure. Stopgap 700 Superflex is reinforced with tiny fibres that reportedly maintain the integrity of the levelling compound and prevent cracks from forming as a result of subfloor movement.

Throughout the building, capping-and-coving was installed to meet clinical regulations using F Ball’s Styccobond F60 contact adhesive. The instant bond formed by the adhesive means it’s suitable for securing vertical flooring accessories, and its ability to withstand wet cleaning reportedly makes it particularly suitable for use in environments subject to extensive cleaning.

Commenting on the project, Tom Parke, contracts manager at RSW Projects, said: ‘Riverside Hospital was a substantial project, so we used F Ball products because we know we can rely on them to produce the best results. The products were easy to use and helped us create a visually attractive installation that will stand up to many years of wear.’
www.f-ball.co.uk