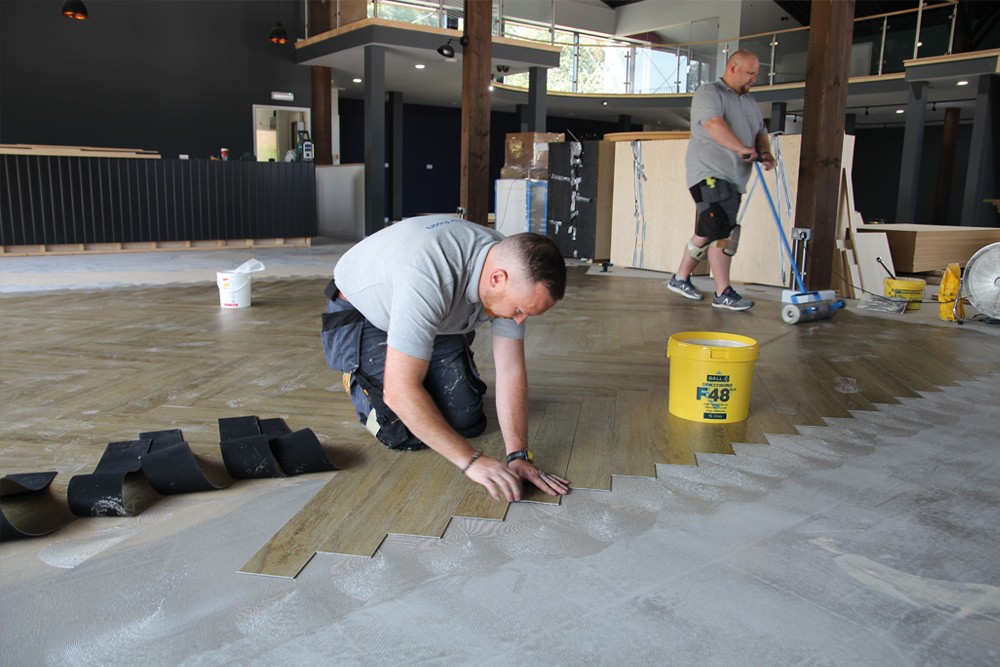 Contractors from First for Floors, based in Saint Austell, installed various floorcoverings, including vinyl sheet and tiles, wood, and carpet tiles, throughout the 620sq m space at the English Spirit Distillery, which features a 2,500 litre copper still as a centrepiece, as well as a café, bar, shop, and offices.

Once dry, F Ball’s Stopgap 300 HD levelling compound was applied in the kitchen that serves the café – ‘the product’s heavy-duty properties will enable floors to withstand being subject to heavy wheeled equipment. Elsewhere, the company’s Stopgap 1200 Pro high performance levelling compound was used to create a perfectly smooth base for floorcoverings’.

F Ball’s Styccobond F48 PLUS was chosen to install Altro Ensemble wood-effect luxury vinyl tiles (LVTs) in the restaurant and shop, each comprising an area of about 100sq m. The company says: ‘The temperature – tolerant adhesive holds floorcoverings in place when subject to high temperatures, which are expected in the building as a result of its large glass front. This can cause tenting and gapping at the edges of vinyl floorcoverings as a result of repeated expansion and contraction over time. Fibres in the adhesive also provide high initial grab, a benefit when installing LVTs.’

In the kitchen, Altro Stronghold ‘Dolphin’ grey vinyl safety flooring was adhered with F Ball’s Styccobond F73 PLUS one-part, moisture-curing heavy-duty adhesive. The company adds: ‘The adhesive, while being easier to apply and faster curing than traditional options, provides the high bond strength required to withstand high foot traffic and heavy loads and is resistant to surface water, which will result from wet cleaning techniques in the kitchen.

‘In the offices, Styccobond F41 carpet tile tackifier created a permanently tacky film to hold Heckmondwike flint grey carpet tiles firmly in place when subject to normal foot traffic but enable them to be lifted and replaced should they become worn or damaged.’

Commenting on the project, Stuart Davies, contracts manager at First for Floors, said: ‘Considering the scale of the project, everything was straightforward and went without any hitches. We’ve been fans of Styccobond F48 PLUS since it was launched, and it’s reassuring to have the support of the F Ball tech rep, Lee Crofts, who was able to endorse our planned course of action.’
01583 361633
www.f-ball.co.uk