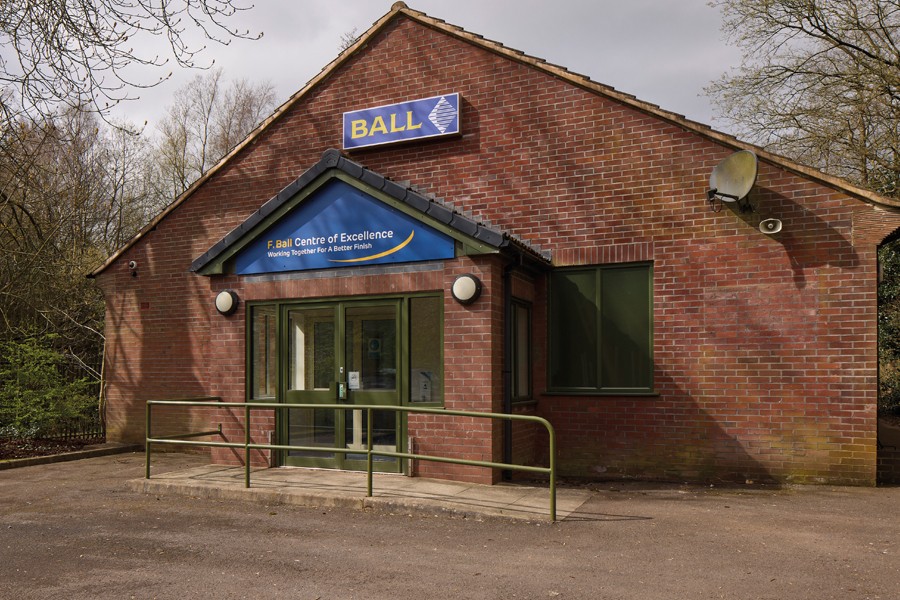 We’re not at crisis point yet when it comes to skills and labour, Darren Kenyon, sales director at F Ball, tells CFJ. And that, he adds, gives us an opportunity…

CFJ: When was the training centre established?
Darren Kenyon: It was established in 2009 and opened by Richard Catt, ceo of the CFA. We made around £1m in investment to completely refurbish this building and have that focus to provide training to industry week-in, week-out.

Why did you decide to establish it?
There was a skills shortage in flooring industry and we felt we had a responsibility as a brand leader to provide training. So, we were probably one of the first in industry to make this level of investment, certainly within our product category.

As the course participants are being trained in the use of F Ball products, does what they learn here help them beyond using only your products?
Yes because, first and foremost, we want to allow people to have the opportunity to upskill in what they do, and promote good practice in application of floor preparation products and adhesives, full stop. We provide courses to people who have worked in the trade for 20, 30 years who maybe want to come in to have a look at something new, right down to running bespoke content for apprentices. You’ve got people who’ve come from industries outside the construction sector who’ve come into flooring and they’re looking to develop that skill base very quickly.

How often are your courses held? Are they always full or do you find yourself chasing to make up the numbers? How frequently do you get cancellations?
In 2021 we reopened the centre in June and by November we had more people through the doors than we had in the whole of 2019. We don’t struggle to fill the courses – we’re booked up well into 2022 already. a two-day course and a one day course each week. We also offer a four-day course for apprentices who are new to industry so they can learn how to use our products and also find out about surface preparation, and in this we try to involve other manufacturers. The idea is to return apprentices to their employers qualified for more than just carrying around bags of screed and mixing it. We want apprentices to know, for instance, how to use a digital hygrometer to measure for moisture. Our three-day LVT fitting course is designed to cater to the fact there’s been a huge explosion in that market over the past decade, and this has proven to be an attraction to carpet fitters looking to ‘up-trade’ their skills. We run bespoke courses throughout the year, these may be on certain topics such as moisture measurement and control for example.

Although the industry in terms of retail and domestic fitters is probably the busiest it’s ever been, with fitters booking installations three and four months in advance, we’ve been pleasantly surprised at the number of participants. Normally, training is something put on the backburner when people are so busy. They’ll say: ‘I haven’t got time to send people because I need them to fit floors.’

But in terms of the numbers – I’m more than happy.

If industry has never been so busy, how can so many contractors afford their floorlayers to be away at the centre?
The excellent way our marketing team has promoted it has certainly helped. We’ve also taken a critical look at what we were offering previously. Then there’s the fact that we have had feedback from floorlayers in which they asked for more practical experience on the course.

So what we’ve tried to provide with the facility refresh during lockdown last year was a more hands-on approach to training, removing the participants where possible from a classroom environment. During the refurb, we built a stage seating area so the guys are in a place where products with which they’re familiar are applied. Don’t get me wrong, we still cover the same topics but it’s in a construction-type environment in which people are more comfortable.

Wasn’t it risky investing in training when the UK economy was highly volatile and – effectively – in a state of shock?
As a company we’re not afraid to continue investing whenever the economic climate has been tough.’, so there were no issues regarding us spending that amount of money at that point in time. What I’ve seen since our reopening in June is people coming in and enjoying the experience more. Often, the guys’ responses are there on social media for the world to see. They talk to their friends and colleagues, and slowly but surely the numbers have increased. We’ve focused on media marketing with publications such as CFJ and we emphasised the training aspect of our offering heavily at The Flooring Show in Harrogate in September – we had more than 30 businesses sign up for courses during the show.

What differences in terms of skills and training requirements, if any, do you notice between fully employed floorlayers and sub-contractors?
We don’t see much – if any – differentials between them. We send out a pre-course questionnaire asking each participant what they want to get out of the course and that may vary from contractor to contractor depending on their skill background and the type of work they do.

But do contractors invest in their sub-contractors’ training?
Of course, if an employer approaches a sub-contractor onsite and finds his skill levels aren’t what they should be, that could be due to a lack of investment in that sub-contractor.
We had a sub-contractor on one of our recent current courses who was actually sent by one of his employers, but I have to say that’s not always the case. Usually, the sub-contractor has to pay – in terms of his time – when he attends our courses, whereas a fully employed floorlayer would be covered in that respect.

One large contractor has said the solution to the skills shortage is to create several localised training centres which would be easy for floorlayers to travel to. What’s your view on that?
Ideally we want people to come here so we can give them the overall F Ball experience including a factory tour; we’ve got everything on tap in terms of what we can demonstrate and, yes, we’ve got people from the extremes of the UK. On a current course there are participants from as far afield as Bodmin in Cornwall and Carlisle, but not everybody is prepared to travel those distances. What we’re going to do with respect to our training investment overall is to make it more mobile. We’ve got a new head of training whose focus will be to improve what we do at Cheddleton and to take training more mobile almost like pop-up training locations. We’ve got relationships with other manufacturers in the industry with whom we’d like to work in partnership. It can be difficult to get people to travel from further afield because if they come for a two-day course they’re effectively wiping out the working week when travelling time is considered.

Is there a particular skill which you find lacking among many floorlayers during your courses?
The starting point for answering that is that we take around 12,000 technical calls a year and obviously we monitor what those questions are. When we go out onsite and there’s an issue, we pick up on what the common causes are in terms of the flooring and generally it’s around moisture. Every course we run therefore has a dedicated section on ‘why and how you measure for moisture, and how you go about treating it to give you a floorcovering installation that meets the British Standard requirements but ultimately gives the client satisfaction in terms of a job well done.

Is there a skills crisis in the flooring industry?
I don’t think we’re at crisis point but similarly I don’t think that we as an industry have made the improvements we could’ve done 10 years ago. But the horse hasn’t bolted yet. In terms of the industry changing – just look at the growth of the LVT market – there’s probably a bigger burst of appetite for these guys to upskill and train than ever before, these guys now see the financial and job satisfaction rewards of fitting LVT, and they want to fit it. That gives an opportunity to us and other training providers to give them the tools to help them upskill.

The industry clearly needs to attract young people to secure its future. Are you seeing a fair number on your courses?
We get a good mix of people. Certainly, there’s a thirst for apprenticeship courses; our first one was booked up in a matter of days, with enough queries on top of that to justify another course. As one of the brand leaders in the industry, we have a responsibility to ensure these the course participants can use our products correctly. The construction sector in general is struggling to attract young people; that’s the challenge and it provides an opportunity for us to go into schools and educate the young that if they want to get into construction, they can earn a very good living. Many of them appear to ask themselves: ‘Why would I want to work on a cold, damp construction site and not earn much money?’ But if they go in with energy and an attitude to succeed, it can be a very rewarding career.
There’s a misperception that jobs such as plastering, plumbing and electrical contracting are higher skilled trades while flooring is considered as being behind those three. That isn’t the case.

What does the future hold for F Ball training?
When our new head of training starts, he’ll have the opportunity to move our centre of excellence forward both in Cheddleton and with our new mobile demonstration unit. We’ll look to take training to distributor trade counters potentially.

Is F Ball continuing to invest in apprenticeships?
We’re currently recruiting five apprentices across a number of company departments. Education has been affected by lockdown, with the result that school-leavers may opt for more academic career choices over practical jobs, exacerbating the skilled labour shortage. Recruitment is not easy at the moment in many industries. However we strongly believe in investing in young people and bringing them into the business. They are the next generation to take the company forward.