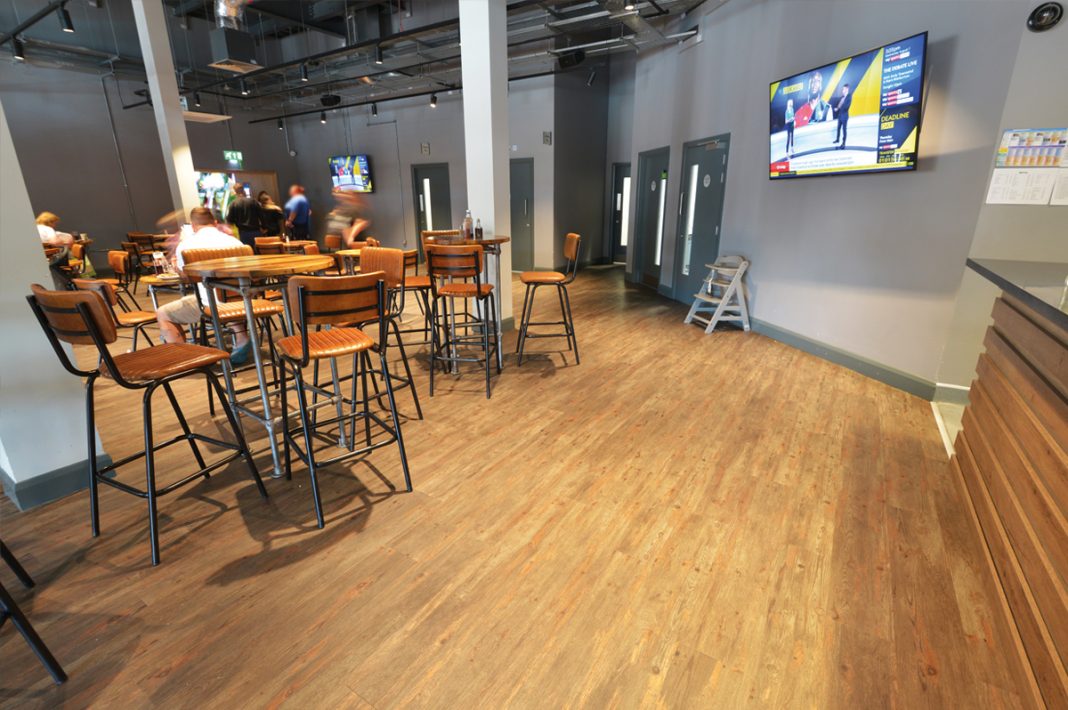 PRODUCTS from F Ball and Co, including the company’s Stopgap 1200 Pro levelling compound and F46 pressure sensitive acrylic adhesive, have been used to install floorcoverings at a new £18m entertainment complex at the White Horse leisure park, in Selsey, West Sussex.

Contractors from Sovereign Flooring, which has locations in Bognor Regis and Hayling Island, installed a range of floorcoverings throughout the new development, including in new restaurants and bars, a function room, adjoining kitchens, bathrooms, and stairways, as well as showers and changing rooms.

In all areas, contractors began by ensuring the newly-installed concrete screeds were suitably sound and smooth, using hand-tools to remove loose materials and debris.

A moisture test conducted by an F Ball technical representative indicated subfloor relative humidity (RH) levels were higher than the maximum 75% threshold for floorcoverings to be installed without a moisture management solution in place and risking for failure.

Therefore, F Ball’s Stopgap F77 waterproof surface membrane was applied where vinyl floorcoverings were to be installed. ‘The product cures in as little as three hours to create a barrier against excess subfloor moisture where relative humidity levels are up to 98% with a single application.’

Says F Ball: ‘Stopgap 1200 Pro is a low odour, fast-setting, fast-drying, two-component levelling compound that is suitable for preparing sound internal subfloors prior to the installation of new floorcoverings. It offers the benefit of being suitable for use over old adhesive residues (including bitumen and carpet tile tackifiers), in which case there’s no need to prime beforehand.

‘In the wet-rooms, F Ball’s Stopgap 400 Repair was used to create an incline to ensure adequate drainage. A fast-setting, rapid-drying repair compound for filling cracks and holes in internal subfloors prior to the application of Stopgap levelling compounds, the product is also suitable for repairing stairs and steps, as well as forming ramps and falls.

Polyflor Expona wood-effect vinyl planks were installed in the sports bar. Polyflor Expona Endgrain vinyl planks, which create the appearance of wood blocks, were used in the areas in front of the bars in the eatery, private members bar, and function room.

Continues F Ball: ‘The pressure-sensitive nature of Styccobond F46 adhesive makes it suitable for installing LVTs. It provides a high bond strength, which increases as it is trafficked, and strong initial tack, meaning that tiles or planks won’t move around once positioned by contractors. The indefinite open time offered by the product reduces the risk of late placement and makes it suitable for creating more complex designs or patterns.’

Safety flooring was installed in the areas behind the bars, kitchens and bathrooms, shower rooms and changing rooms.

Continues F Ball: ‘Sovereign Flooring used F Ball’s Stopgap P131 primer to prime the subfloor area in the eatery where carpet would be installed before using a moisture resistant adhesive to install underlay followed by carpet to create a dual bond system, which would allow the carpet to be easily removed and replaced at a later date.

‘Stycco Flex rapid-curing, flexible adhesive was used to affix the stair nosings on the central staircase that connects the sports bar and eatery. The high-strength build-up and fast-curing time means it can secure stair nosings and trims in as little as 60 minutes, without the need for mechanical fixings.