Prioritise floorlayers’ health when it comes to adhesives 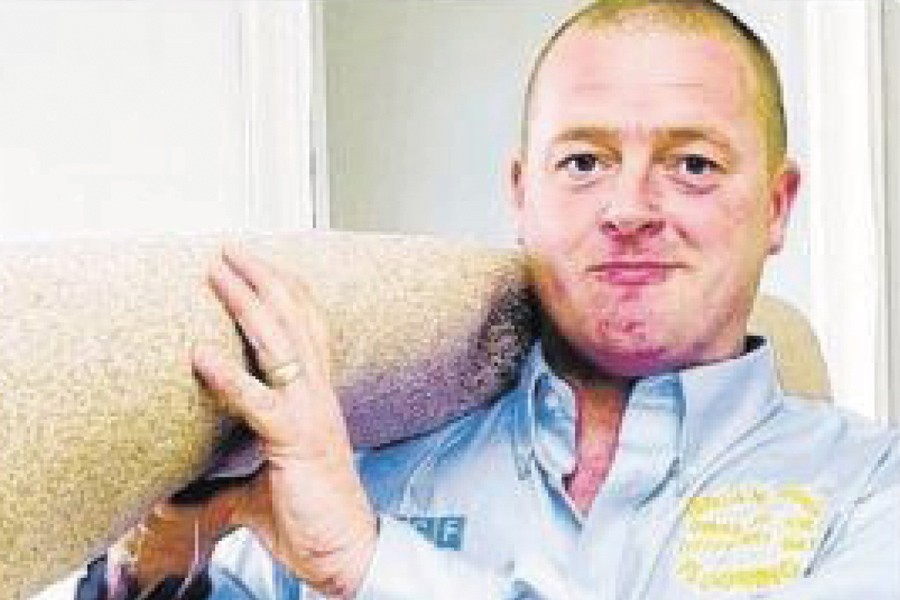 ABOUT five years ago I wrote an article about solvent and spray adhesives. I was very proud of it and thought that it would make fitters and manufacturers sit up and take note of the dangers of inhaling potentially harmful elements into our bodies, particularly our lungs.

I submitted my article to CFJ, puffing out my chest proudly, waiting for a response. The editor rang me the next day commenting on how good it was in raising awareness of something that’s been relatively low-key, but said he’d just have to run it past a few people as it was a touchy subject.
A few days passed and he rang saying he’d been advised not to publish it as it may be challenged by manufacturers. He gave me an option, asking what I’d prefer to do: push ahead with publishing it and risk controversy? Or wait until the issue was beyond doubt?

I was disappointed as I felt this was something that needed to be brought to peoples’ attention. Surely peoples’ health takes priority over anything else? But I didn’t want to cause trouble so I reluctantly suggested we file the story and look at it again at a later date.

I think that that date should be now!
Last year at The Flooring Show at Harrogate I came across a company called Gekko. It had an eye-catching brand logo in bright green of a lizard-type creature that I later discovered was an actual lizard called a gecko.

There was a young lady fronting the stand with a welcoming smile giving away free samples of spray adhesive and spray contact adhesive. She was also handing out smart-looking notepads with matching pens attached to the side. There was a guy on the stand who’d obviously picked the short straw – demoing the toxic-free adhesive canisters for large areas.

The young lady introduced herself as Rachael Morgan and explained that their products didn’t have the chemical dichloromethane (DCM) in them. I asked what that was and she explained that this chemical may damage your lungs and could, later in life, make you poorly. She said her products were DCM-free.

(According to the US-based National Center for Biotechnology Information at the National Library of Medicine, dichloromethane is a dense, non-flammable colourless liquid at room temperature (bp 40deg C, d = 1.33) which is immiscible with water. It’s widely used as a solvent, a paint stripper, and for the removal of caffeine from coffee and tea. It has a role ‘as a polar aprotic solvent, a carcinogenic agent, and a refrigerant’. The American Chemical Society says although dichloromethane is the least toxic C1 chlorohydrocarbon, it may present hazards. Inhaling it can reportedly produce symptoms ranging from drowsiness to respiratory tract irritation and allegedly even death. However, the society stresses, not enough studies have been done to establish the degree of exposure that causes cancer. – Editor)

I was interested in learning more. I noticed these nifty-looking footballs on the shelves which Gekko was giving away if you purchased a canister and spray nozzle. I asked if I could have one and she laughed and said: ‘nice try’. She put my samples in a bag and told me if I needed more info I was free to call back.

After the show, I noticed this company kept popping up, particularly on social media. Then I noticed training centres and wholesalers advertising and stocking their products. Suddenly I heard the word ‘dichloromethane’ everywhere. Why hadn’t this been mentioned before, I wondered.

Recently I noticed another manufacturer producing spray adhesive DCM-free. We all use spray adhesive, some more than others, and we all know it comes in handy for certain things. But if we’re offered danger-free spray adhesive then why not use it for ease and speed on some of our installations that need some quick fix grab here and there?

Hopefully more manufacturers will think about prolonging our wellbeing and follow suit. After all, our health is our wealth, as the saying goes.

So, here’s the original article I wrote:
I’d like to say I only fit quality flooring in wealthy houses that are clean and have a nice, fresh odour. But I don’t. I have a couple of contracts where I supply and fit-out low-cost rental accommodation where felt-backed carpet goes straight on the floor with no underlay or gripper rods.

You carpet fitters out there know exactly what I mean and probably do it – or have done it – yourselves. It’s a laid-out perimeter fixed with spray adhesive and tensioned with the knee-kicker to pull out creases.

I was recently carpeting one when I stopped for a cup of tea. I was sat on the floor with my back against the wall, listening to the radio while sipping my well-needed brew when I picked up a tin of spray adhesive next to me and read what was written on the back.

I know the stuff isn’t great for you, but everyone uses it and surely if it was that bad it wouldn’t be readily available to buy. But what was written in plain view really shocked me.

The normal precautions were there as you’d expect: extremely flammable, for starters (yes, I know that!); keep out of reach of children (obviously!); don’t get it on your skin (it’s a nightmare getting it out of the hairs on your arms); don’t get it in your eyes (I don’t intend to); no smoking (I don’t smoke anyway); wear protective clothing, gloves, eye goggles etc; dispose in accordance with local regulations in a brown bin; protect from sunlight etc; keep it in the back of van. Then it said: ‘suspected of causing cancer’. This really made me sit up and think. I’ve been using this product for years and I’d never noticed it could potentially cause something that serious.

I speak to many fitters who openly use spray adhesive and see many pictures of them working with a tin of the stuff next to them in the picture. I know fitters who spray the gripper rods with it before anchoring it on for that extra grab, as they say.

I even know a fitter that uses it on underlay, even on wooden subfloors because he doesn’t like the indentation on the staples when using a staple hammer. I’ve seen fitters prime the floor before sticking gripper rods down, using it on open-plan stairs – even using it to stick domestic vinyl.

When fitting a cap-and-band bullnose I fix the band with spray adhesive like many other fitters do.

Why are we all so obsessed with using it? I remember when I was an apprentice we never used it (in fact, was it even out 25-30 years ago?) I know my employer never used it. Nowadays it’s a crucial part of the toolkit.

That night when I got home I pointed out what I’d read on the back of that tin on a forum on social media and was surprised at the comments. One well-known face in the trade said he was consistently short of breath and coughing.

On a scan of his lungs the doctors apparently said he’d damaged them owing to solvent abuse and asked if he used solvents for recreational purposes. They ended up talking about the nature of his profession and pinpointed what adhesive had damaged his lungs.

Another fitter told me he hasn’t used spray adhesive for more than a year after applying it in a domestic property; on that occasion, he claimed he sprayed it underneath a carbon monoxide alarm and set it off. That was enough for him to stop using it.

That got me thinking of times in my younger years when I’d used contact adhesive in confined areas. It caused me to become disorientated and I’d have to go outside for a breather. But I recalled one incident particularly where I was fitting carpet on a very small, enclosed stairs going up to an attic where the homeowner had made the stairs himself. Because they weren’t your typical stairs, it needed quite a lot of adhesive, and I used the aerosol kind.

I felt slightly depressed for about a week afterwards and knowing what I know now, I think that it may possibly have been owing to overexposure to the spray I used that day. If you go to any training centre, you’ll notice spray adhesives aren’t available as most training centres don’t allow it. Could we do without it? I was going to find out.

The next day I disposed of all the tins of the stuff in my van. I quickly realised I’d been using it unnecessarily and didn’t need it. I swapped it for latex double- and sided-tape and realised it was much more cost efficient.

If you’re using spray adhesive the area should be well-ventilated and the appropriate personal protective equipment should be worn. That’s what manufacturers recommend.

Someone once said to me that as you get older you’ll start looking after your health a lot more and being more cautious of what you put into your body and of the potentially harmful consequences it could have. And that’s undoubtedly true of many of us.

I for one have realised there’s some things you think you need but really, you’re using them unnecessarily and they could potentially damage your health. As they say: you’re never too old to learn.
01942 211415
07774 851641
www.briankingflooring.co.uk
Brian King is NICF president